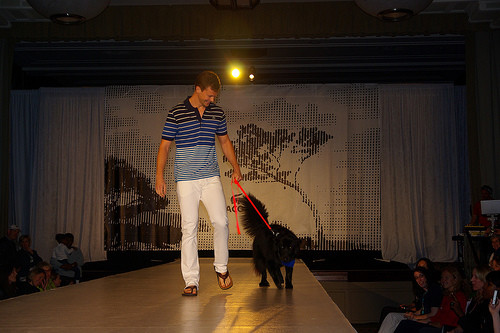 Despite the Spring shower, the spring line from Lacoste was a hit.

Check out our images from the night.

Initially scheduled to be held on King Street, the annual Family Circle Cup kick-off fashion show took place last night in The Riviera Theater. Local college students, Charleston residents and two adorable kids modeled Lacoste's spring pieces, which surprisingly consisted of more than polos and sweaters tossed over shoulders (although there were a fair share of both).

Adoptable dogs from Pet Helpers on Folly Road pleased the crowd as they walked down the runway with models, while tennis pro and Family Circle Cup player Dominika Cibulkova showed off her glam side on the catwalk as well. The audience was older than expected, mostly made up of tourists in town for the tennis. Noticeably missing was the city's usual suspects of event attendees and front-row fashion show spectators- perhaps they couldn't hack the rain.

If SAKS had any fear of the Family Circle Cup attendees and players harming their merchandise at the afterparty, they certainly hid it well. Beverage bars served martinis, red wine and other cocktails from the designer shoe section, while buffet tables offered heaps of food including sushi (hello, soy sauce stains!), pasta and a make-your-own wrap bar.

Lining the outskirts of the store were oodles of goodies such as candy and popcorn, with to-go bags so you could savor your sweets at home. Gift bags at the door provided each guest with a 15% off gift certificate for the evening, while models circled the store in the latest designs. With a band set up in the eveningwear section and dining tables in the handbag department, it was a full blown party.