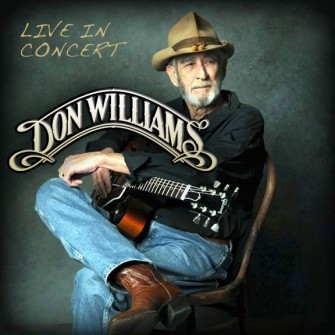 Known as country music’s “Gentle Giant” for his warm baritone and laid-back ways, Don Williams is a major country hitmaker and international ambassador. Scoring at least one major hit every year between 1974 and 1991, he had an impressive fifty-six chart records. Fifty of these reached the country Top Twenty, and forty-five made the Top Ten; seventeen went to #1. In 1978 he was CMA Male Vocalist of the Year, and his recording of “Tulsa Time” was ACM Single of the Year. In 1980, readers of London’s Country Music People magazine named him Artist of the Decade.

In 1974, Williams scored his first chart-topping record, Al Turney’s “I Wouldn’t Want to Live If You Didn’t Love Me.” It launched a string of fifteen straight Top Ten hits, including songs by numerous top-tier writers: Wayland Holyfield’s “You’re My Best Friend” and “Some Broken Hearts Never Mend”; McDill’s “(Turn Out the Light and) Love Me Tonight,” “Say It Again,” and “It Must Be Love”; and Danny Flowers’s “Tulsa Time.” The singer’s winning streak also included the Holyfield-Williams composition “Till the Rivers All Run Dry” and the Williams originals “Lay Down Beside Me” and “Love Me Over Again.”

During the eighties and early nineties, Bob McDill continued to supply Williams with first-rate material, most notably the literary and evocative “Good Ole Boys Like Me.” Other hits came from leading songwriters such as Roger Cook (“I Believe in You” with Sam Hogin; “Love Is On a Roll” with John Prine), Dave Loggins (“We Got a Good Fire Goin’”), Rory Bourke and Mike Reid (“I Wouldn’t Be a Man”), and Dennis Linde (“Then It’s Love”; “Heartbeat in the Darkness” with Russell Smith).

As of 2010 the prolific Williams had released more than thirty-five albums. The Best of Don Williams, Volume II and The Best of Don Williams Vol. III have been certified gold, and I Believe in You has been certified platinum. His video collection Don Williams Live has attained gold status. After switching from JMI to ABC-Dot (1974-78), Williams moved in succession to MCA (1979-85), Capitol (1985-89), and RCA (1989-92). Later releases appeared on American Harvest, Giant, RMG, and Intersound/Compendia. Williams was one of the first country artists to make a music video, 1973′s “Come Early Morning.”