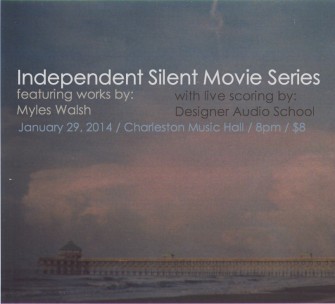 We are kicking back up our Film Series at The Charleston Music Hall.  We have a full size movie screen and the best acoustics in town, so why not turn the Music Hall into a Movie House once a month.  Last Fall we showed cult classics like Old School, Pulp Fiction, Stop Making Sense, and Fantastic Mr. Fox.  We have decided to make our movie events once a month and create some really special moments highlighting some local and regional film makers, presenting a music film montage night, as well as working with the Charleston International Film Festival.

We are kicking off this series with  ”A Night of Independent Silent Film.”  The Film: Slam Dunk Summer Camp, Volume One  The Director: Myles Walsh  Live Original Scoring by: Designer Audio School

Myles Walsh uses traditional cel animation techniques to create short looping animations that are well suited to be displayed in gif format. Included in the program are experimental video and animation works, featuring cartoon drawings and abstract objects or shapes in motion.

In conjunction with these visual works Designer Audio School (consisting of a unique assortment of composers and performers, assembled by Nick Jenkins) will debut a live score specific to this collection by exploring the exciting and experimental elements of sound design.