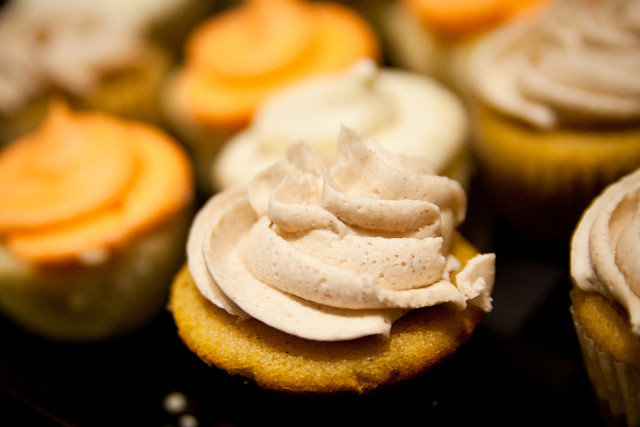 Crady’s Eclectic Cuisine on Main in downtown, historic Conway has advanced to the second round of the national US Foods’ Next Top Product Competition with Barbara Crady Whitley’s famous fresh peach cupcake with apple butter cream frosting recipe.

This announcement places the recipe in one of the top 30 in the nation. Out of 250,000 chefs, Whitley was the only one chosen in the entire state of South Carolina.

Crady’s will win a $20,000 kitchen remodel if their recipe wins the overall competition. The three chefs with the highest number of votes will prepare their dishes at the US Foods Fall Food Lover’s Forum in Chicago in September. The winning recipe will debut in March of 2013 as a Chef’s Line product.

“We are thrilled to have our recipe reach the top 30 in the nation,” said Crady’s Owner, Barbara Whitley. “While it is no surprise that Barbara’s (Mom’s) delectable recipe would do this well, this achievement is another element that sets us apart from the competition,” added Heather Whitley.

People can vote once a day for the famous dessert on the US Food’s Facebook page. There are three categories: appetizers, main dishes and desserts. Barbara’s cupcakes appear within the dessert section. Voting ends September 7, 2012.

“A new kitchen would be perfect,” said Whitley. “It is much needed and comes at a time when we are rebranding our restaurant. This would be a dream come true. We are hoping that everyone will vote for us. This not only puts us in the recipe books, but pays homage to Conway, to the Grand Strand, and to the entire state of South Carolina,” she continued.

Crady’s Eclectic on Main started as a coffee shop more than ten years ago and has evolved into a small-town bistro with a big-city attitude. Serving lunch, brunch, dinner, and libations, the Conway icon is located in downtown, historic Conway, South Carolina. The family owned business is well known for its fresh foods, its homemade desserts, custom-baked cakes, and catering. Its eclectic menu and atmosphere have earned accolades in national publications including Southern Living.  Crady’s is located at 332 Main Street, Conway, SC. For more information visit: cradys.com or call 843-248-3321. Like them on Facebook and follow them on Twitter and Pinterest.