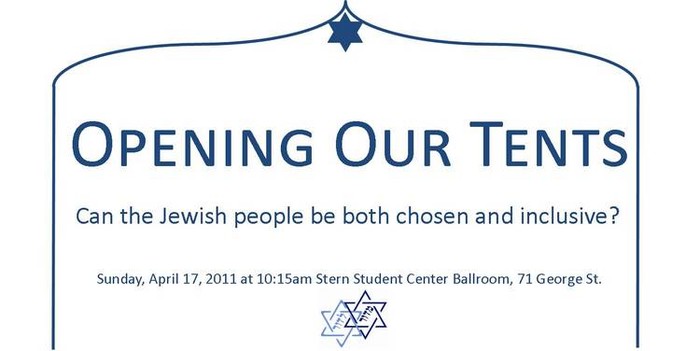 ﻿Can the Jewish people be both chosen and inclusive?

Join us for our last Sunday morning lecture of the semester at the Yaschik/Arnold Jewish Studies Program.

Rabbi Stephanie Alexander of Charleston's KKBE and Rabbi Judith Schindler of Charlotte's Beth El explore open tent Judaism starting with its history and letting us know what it looks like today, challenges and all.

Don't know what open tent Judaism is? Come find out!

As always, we're serving free breakfast in Arnold Hall, 96 Wentworth St., at 9am.

Rabbi Stephanie Alexander is mother to Eli, wife to Rabbi Aaron Sherman, and rabbi to the people of Kahal Kadosh Beth Elohim. Rabbi Alexander received her undergraduate degree, a B.S. in Psychology with honors in Jewish Studies, from Tulane University in New Orleans. She earned her ordination, as well as Masters degrees in Hebrew Literature and Religious Education, from Hebrew Union College-Jewish Institute of Religion in 2003. Throughout her training and practice as a rabbi and educator, Rabbi Alexander has sought out institutions that value creativity and inclusivity.

Rabbi Judith Schindler has been Senior Rabbi of Temple Beth El of Charlotte, North Carolina for the past seven years. She came to Beth El as an Associate Rabbi in 1998. Rabbi Judy received her Bachelors Degree in Clinical Psychology from Tufts University in 1988 (magna cum laude), her Masters from the Hebrew Union College in Los Angeles in 1993, and was ordained at the Hebrew Union College in New York in 1995. Rabbi Schindler is one of a dozen women rabbis in our country leading synagogues of over 1,000 families. She is the daughter of the late Rabbi Alexander Schindler who was president of the Union for Reform Judaism from 1973-1995.﻿