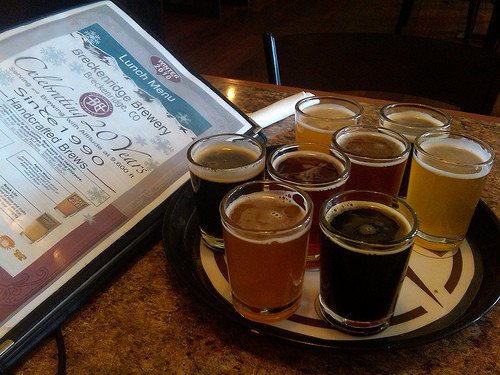 I love beer...but I don't think you understand. I love beer in about same way that Steve Carell's character in "Anchorman" loves lamp. I love beer with a reckless and often times inexplicable fervor.

The Breckenridge beer paring at Mellow Mushroom downtown just reaffirmed said love. Albeit, the setting could have been a tad bit more intimate for the 15 or so people who attended, Todd, owner and brewmaster of Breckenridge, made sure that everyone felt like family.

Heck! Me and few other mass media types were practically sat next to Todd's parents!

Onto the beers, though, which all had their own personalities. My personal favorite(s) was a tie between the "Chief Wampum 471" India pale ale, which was really hoppy but rivaled the pure drinkability of a Dogfish Head 90-Minute IPA, and the Wheat Agave which was light, refreshing and the perfect alternative for a late-summer or early fall beer.

The food parings didn't disappoint for the most part either. The chef brought out a chip-and-salsa starter made with agave and mango (oh, and a few shots of tequila from what I was told), and finished the dinner off with, by far, the most amazing vanilla porter milkshake I've ever had.

It was, all in all, a really good experience that I would like to have again in the very near future. A trend is forming here in Charleston where the traditional outlook of the "tasting" is starting to include less fermented grapes and more hops and malt. I, for one, welcome the change with open arms.