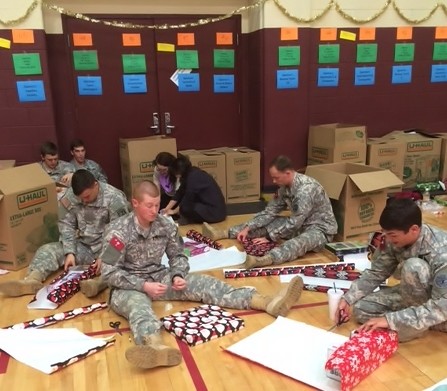 For the second year in a row, cadets from The Citadel worked to make holidays brighter for more than 300 children in the Lowcountry. Through a partnership with Charleston Hope – a national 501(c) 3 non-profit organization founded by a College of Charleston student, Emily Hoisington, cadets at The Citadel founded their own club two years ago.

Senior cadet, Brianna Young, a political science major, founded The Citadel’s branch of Charleston Hope in 2014 and led the initiative throughout the past two years. Supporters of Charleston Hope adopt a classroom (or twenty!), and provide a Christmas gift to each student in the class at local Title I schools, meaning many of the children come from economically challenged families. And much like last Christmas, this season, The Citadel cadets’ club adopted 20 classrooms and delivered gifts to 360 children.

“I got linked up with Charleston Hope my junior year when I was searching for a service project for my company in the Corps for the holiday season. When I came across adopt-a-classroom, I knew it was something cadets could get behind and would really love,” said Young. “The desire and passion to serve the community and give back is a unique characteristic of cadets at The Citadel – selfless service truly embodies everything they are working to instill upon us here.”

They started fundraising in August when the fall semester began. It took months for Young and the club to raise the money they needed to meet their goal of giving gifts to at least 350 Lowcountry children.  They held bake sales, designed and sold T-shirts, held raffles at football games, and sought donations.

“The support we received this year was overwhelming and we eventually raised over $4,000,” Young said. “We were able to adopt children ranging from Pre-K to 7th grade, so the shopping list was extensive, but it is one of my favorite parts. I spent every day of Thanksgiving furlough shopping for the 360 gifts. The College of Charleston hosted a wrapping party and more than 30 cadets and 150 community partners gathered to wrap some 3,000 gifts in just under two hours.”

Young, who volunteers at some of the local elementary and middle schools in Charleston throughout the year, says it means a lot to see and get to know cadets in uniform, who are taking time to help them, and who are working to give them a bit of an introduction to college.

“On delivery day just after Thanksgiving, several students receiving gifts cried and thanked us for coming. Some even saved their present to rewrap to give to a younger sibling. It’s an amazingly emotional and humbling day to watch an 8-year old child carefully rewrap the toy they just received for a younger sibling.

Eleven cadets spent the day with students and teachers at Burns Elementary in North Charleston that day.

“Delivery day is really a gift to myself - seeing the smiles on the student’s faces is unforgettable,” said Young.

As Young is expected to graduate in May, her ultimate goal is for The Citadel’s Charleston Hope club to continue its growth.

"Cadets have an enormous impact on the community around them, often without realizing it. The students that are at Charleston Hope events, are the same ones that attend afterschool and mentorship programs and they remember each and every cadet they come across," said Young. "The power to truly impact the younger generation that may or may not have someone to look up to is an opportunity that should never be overlooked.”