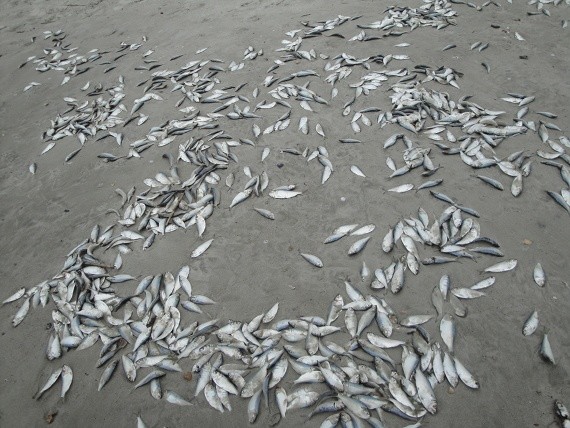 4:04 pm on Saturday January 8, 2011 | Posted by Amanda Click
Thousands of dead fish wash up on Folly Beach (update: cleaning up)

Update January 8 p.m.: Charleston Waterkeeper has shared some nice photos and video from the scene.

Check them out here.

Update January 8, more details, cleanup: The consensus seems to be that cold water temperatures were responsible.

Meanwhile crews have hurried to cleanup the mess before the stench arrives.

It's an effort The Post and Courier has a nice report on and photo of.

Meanwhile NBC News 2 has a video of all the dead fish.

Oh, and wanted to remind about reports from July 2010 when thousands of dead clams washed up on Folly.

First reporting January 6: In an as-of-yet unexplained phenomena much like the one that took place in Arkansas earlier this week, thousands of dead fish have washed up on the shore of Folly Beach.

Early reports are saying the fish likely died as a result of the cold water, but to be sure, SCDNR crews are out on Folly Beach collecting samples.

According to the brief in The Post and Courier, "From the Folly Beach pier, there is a line of dead fish as far as one can see in both directions."

All of the fish that have washed up appear to be Menhaden.

Update December 7: The Post and Courier has followed with a lengthier update with more background but few new developments; you can read that report here.