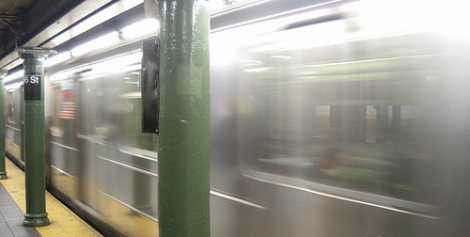 Image by Flickr user Antonio BonannoImage by 20080729subway.jpg Next stop: Murrells Inlet. And please remember to wear your scuba gear.

Forty-four retired New York City subway cars have made their way to Murrells Inlet, near Myrtle Beach, to become a new habitat for underwater life. The cars are now part of the Bill Perry Jr. Artificial Reef, 25 miles off shore.

From the S.C. Dept. of Natural Resources:

The 44 subway cars, retired from New York City Transit’s subway department as recently as one month ago, were dropped onto the offshore reef, creating a diverse habitat with suitable structures for recruiting marine life on an otherwise hard-bottom ocean floor. The subway cars began their trek from the New York City Transit facility on July 21st for the trip to the Bill Perry, Jr. reef site, located 25 nautical miles offshore from Murrells Inlet.

According to Bob Martore, DNR’s Marine Artificial Reef Program Coordinator, "Once the subway cars are cleaned and the windows and doors are removed, they provide an economically valuable and environmentally friendly source of material for our marine artificial reefs. Our current subway car reefs are really thriving. We’re fortunate to have this partnership in place with the New York City Transit Authority."

The state Dept. of Natural Resources' Marine Artificial Reef Program has existed since 1973, and DNR says that, while subway cars haven't been used for reefs off Murrells Inlet, they have been used in other places since a cooperative agreement was reached with New York's Metropolitan Transit Authority several years ago. A total of 200 cars have been used in various reefs, one of which is the Comanche Reef off Charleston.

The Sun News out of Myrtle Beach has a good Q&A on the project, as well:

Question | How do the subway cars enhance the environment?

Answer | Once cleaned and prepared for deployment, subway cars provide suitable structure for enhancing artificial reefs. With the windows and doors removed from the cars, these durable materials, once deployed, offer an ideal surface for organisms such as algae, barnacles, corals and sponges to colonize.

Other marine species, such as crabs, shrimp and juvenile fish are attracted to these structures for food and shelter. Larger species of fish are also recruited to these reef areas for shelter, food, and to spawn.

Because of the lack of naturally occurring hard-bottom areas along the coast of South Carolina, the creation of artificial reefs is particularly important to the development of our marine fisheries resources.