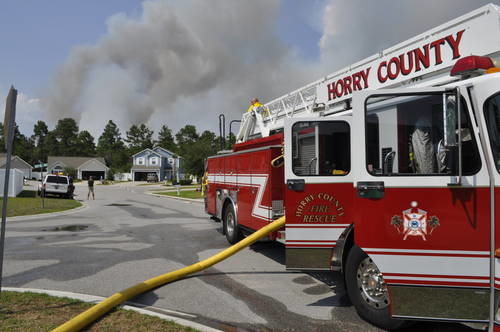 7:30 am on Friday July 29, 2011 | Posted by Chris Mowder
Fire burning in Carolina Forest (update: Forestry commission is out)

Update 7/29: Just giving a quick update to wrap this thing up. The S.C. Forestry commission has pulled their crews from the Hornet Fire and local fire rescue crews will continue monitor the area.

Update 7/20: Big surprise... fireworks have been determined as the cause of the Hornet Fire.

The fire still isn't out yet and firefighters are keeping a watch on it. The Sun News has some more details here.

As far as the specific fireworks used...

Update 7/18: Twitter was all a flutter this morning with tweeple asking, "where's all the smoke coming from!?"

Don't worry, the smoke that is reaching to and south of Myrtle Beach proper is from the contained Hornet fire that occured the weekend before last near the Avalon subdivision in Carolina Forest. Watch the video at the bottom of this page from this mornings WMBF broadcast, and head on over to read the accompanying﻿ write-up.

In related news, The Sun News has a write-up today regarding the drought conditions and how they may get worse in Horry County before they get better. So hop on over to The Sun News for the details.

Update July 4th 6:30 p.m.: The Carolina Forest Chronicle reports that the fire is still burning but most of the smoke residents are reporting is from the controlled burn to contain the fire.

There are more details on the Chronicle website. Read them here. WBTW also has an update they issued a couple hours ago. That is here. The Sun News has also issued a similar update.

Update July 3rd 11:30 p.m.: According to WMBF news the South Carolina Forestry commission has reported the fire is 60% contained and not posing a threat to any structures at this time.

Just like last time, we found Twitter a valuable resource for keeping track of citizen and news updates.

The fire is located behind Pantherwood Drive in the Avalon subdivision. According to HCFR spokesperson Leslie Yancey, the fire started around 12:30 p.m. Sunday.

"I'm not leaving here until that smoke goes away," said Pantherwood Drive resident Nancy Connell. "If I have to I'm packing up my dog and my photo albums and I'm going to Max & Erma's."﻿

Another report from HCFR Battalion Chief Matthew Montgomery said the fire is in a swampy area behind the Woodbridge subdivision, across from Plantation Lakes.﻿

As of 3:15 p.m., officials say no structures are currently threatened and there are no evacuation orders for residents nearby.

Nonresidents are urged to stay out of Avalon so rescue workers are not impeded. Firefighters are concerned the blaze could spread, so they are working to try to contain it.﻿

So far, approximately 15 acres have burned, and smoke from the fire can be seen from several miles away.