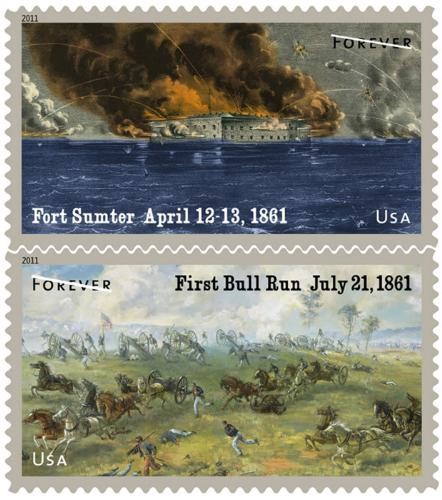 I suppose it's no surprise that Civil War stories are dominating the news today.

The U.S. Postal Service has announced they're doing an annual series of Forever Stamps that recognize key events of the Civil Wa, which began 150 years ago today at Fort Sumter in Charleston Harbor.

The first-day-of-issue dedication ceremony took place at Liberty Square in Charleston, a location within earshot of cannon fire that ignited the conflict that killed 670,000 Americans — a casualty rate exceeding the combined total of Americans killed in all wars since that time.

This first pane of the series, to be issued annually through 2015 in double sided sheets of 12 stamps, depicts two stamp designs commemorating the beginning of the war in April 1861 at Fort Sumter and the first major battle of the war near Manassas, VA.

And that's the core of the news, more details than you can handle on buying, stamping, and background follows in the remains of the press release below:

"From this day forward, these historic images of Fort Sumter and the First Battle of Bull Run will be carried on letters and packages to millions of households and businesses throughout America," said James C. Miller III, U.S. Postal Service Board of Governor member in dedicating the stamps. "In this small way, the United States Postal Service recognizes the Civil War as a significant and uniquely American experience, and we hope to share the lessons learned ― as well as the story of those who endured the four-year ordeal ― with Americans everywhere."

"Since the founding of our country, Americans have wrestled with fundamental questions about the scope of freedom," said Marshall. "When the war finally ended, four devastating years later, the demand for separation had been denied, and slavery was forever ended in the United States. At last, the country was ready to accept responsibility for the words in its own Declaration of Independence that 'all men are created equal.' Today, many issues remain unresolved by this uniquely American war — and yet, one universal truth remains. We are truly one nation of free men and women."

Art director, Phil Jordan of Falls Church, VA, created the stamps using images of Civil War battles. The Fort Sumter stamp is a reproduction of a Currier & Ives lithograph, circa 1861, titled "Bombardment of Fort Sumter, Charleston Harbor." The Bull Run stamp is a reproduction of a 1964 painting by Sidney E. King titled "The Capture of Rickett's Battery."  The painting depicts fierce fighting on Henry Hill for an important Union artillery battery during the Battle of First Bull Run. For the stamp pane's background image, Jordan used a photograph dated circa 1861 of a Union regiment assembled near Falls Church, VA.﻿﻿

"The Civil War commemorative stamps will provide meaning and true reflection for generations to come," explained Vela. "Through events and programs held throughout the country, it is our hope that the citizens of this nation will be challenged to consider how their lives, and their own American experience, have been shaped by this signature period of American history. For it is a shared history, and a shared legacy, owned by all."

Mail was a treasured link among Civil War camps, battlefields and home. Recognizing its importance to morale, both northern and southern armies assigned personnel to collect, distribute and deliver soldiers' mail. Wagons and tents served as traveling Post Offices. Visit this link for additional information.

While the Postal Service does not maintain records on the thousands of Civil War veterans who worked for the Post Office Department, today's Postal Service stands proud as the nation's largest civilian employer of veterans. Of more than 578,000 career employees, more than one-fifth of its workforce — nearly 128,000 — are veterans, 48,000 of whom are disabled.

Customers have 60 days to obtain the first-day-of-issue postmark by mail. They may purchase new stamps at their local Post Office, at The Postal Store website at www.usps.com/shop, or by calling 800-STAMP-24. They should affix the stamps to envelopes of their choice, address the envelopes to themselves or others, and place them in a larger envelope addressed to:

After applying the first-day-of-issue postmark, the Postal Service will return the envelopes through the mail. There is no charge for the postmark. All orders must be postmarked by June 13, 2011.

Stamp Fulfillment Services also offers first-day covers for new stamp issues and Postal Service stationery items postmarked with the official first-day-of-issue cancellation. Each item has an individual catalog number and is offered in the quarterly USA Philatelic catalog. Customers may request a free catalog by calling 800-STAMP-24 or writing to:

While supplies last, the Civil War souvenir sheets, the Civil War Keepsakes with Digital Color Postmarks, and the 1861 Collectors Folio will be available at select Post Offices. Also, customers can order all stamps and products online atwww.usps.com/shop, by calling 1-800 STAMP-24, or by using the mail-in order form in the USA Philatelic Catalog. You can subscribe to the catalog at www.beyondtheperf.com, www.usps.com/shop, or by calling 1-800 STAMP-24.