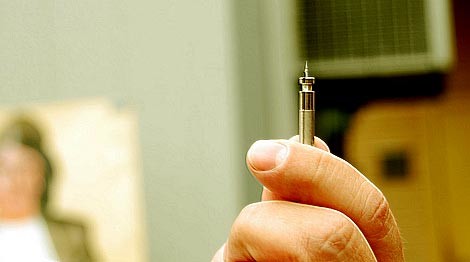 8:13 am on Sunday October 26, 2008 | Posted by Ken Hawkins
Investigation over multiple Tazings

Image by Flickr user kakachuImage by 20081026taser.jpg A Taser barb. When the devices fires a ranged shot, two of these stick into the target to deliver the shock.

A Columbia man was hospitalized for "two months for kidney failure, seizures, breathing problems and severe muscle weakness" after he was shocked with a Taser multiple times, after being handcuffed.

The State writes:
After Green refused to give him his hands to be cuffed, [arresting officer Tom Hodges] said, he “drive” stunned Green — meaning the weapon was placed directly on the skin —on the back and arm. Green then allowed himself to be cuffed, but after refusing more commands to spit out what was in his mouth, Hodges “drive” stunned him two more times, on the shoulder and abdomen, for a total of five times, the deputy said.

“Deputies could see him swallow a white rocklike substance,” Hodges said in his report, noting he “did not want Green to harm himself by swallowing more drugs than he already had.”

A similar case about "reckless use of Taser" is going on in Charleston County.

Tasers have a reputation for being a safe alternative to guns. That seems to hardly be the case when they're used excessively or improperly. Regarding them as dangerous, while safer than a handgun, seems to be the proper thing to do to ensure appropriate and only sufficient use.