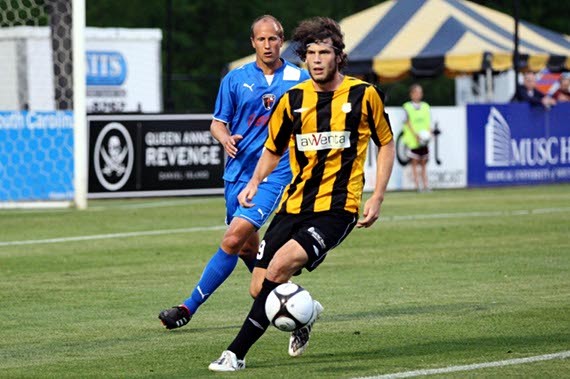 Charleston Battery forwards Lamar Neagle and Tom Heinemann have both earned USL-2 honors following the conclusion of the regular season.

Lamar Neagle fired his way to the top of two categories taking home the Scoring Champion and Goal Scoring Champion titles. Neagle, who spent 2009 with the Seattle Sounders of MLS, nudged out Richmond striker Matthew Delicâte in both categories after recording 12 goals and 25 points in 19 league games.

The title of USL-2 Assist Champion is shared in 2010, with both Richmond’s Mike Burke and Charleston’s Tom Heinemann leading the pack with five. Heinemann turned in one of the most complete seasons in USL-2, also finishing third in goals (7) and points (19). Burke, the 2007 and 2008 USL-2 Assist Leader and 2007 MVP, finished as the No. 3 scorer for the Kickers.

At the other end of the field, Richmond veteran Ronnie Pascale earns the title Goals-Against Average Champion by virtue of a miniscule 0.882 average in 17 games played. Pascale, who allowed only 15 goals and tied for the league shutout lead with six, is a three-time USL-2 Goalkeeper of the Year (2006, 2007, 2009).

All four are set to battle in the 2010 USL-2 Playoffs, with Richmond and Pittsburgh fighting it out in a semifinal this Saturday at 7 p.m. at Richmond City Stadium. The winner advances to face the Battery in the USL-2 Championship live on FOX Soccer Channel at 6 p.m. August 28 at Blackbaud Stadium.