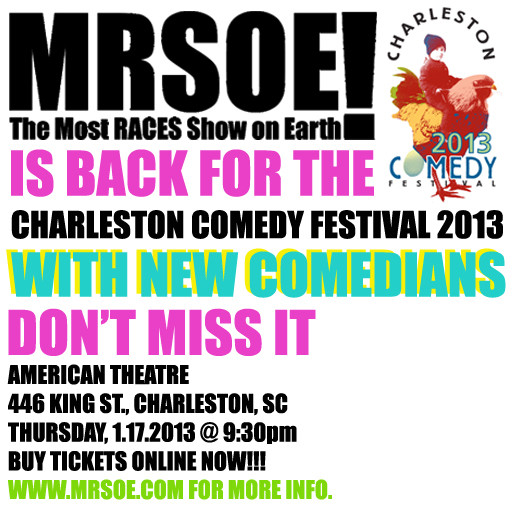 Back by popular demand, MRSOE! (The Most RACES Show on Earth!) has been invited back to the 2013 Charleston Comedy Festival! The American Theater will once again be host to one of the most innovative and entertaining multicultural comedic showcases on Thursday January 17, 2013.

MRSOE! (The Most RACES Show on Earth!) is a stand-up comedy showcase that examines racial differences through the lens of laughter and features fearless comics from various ethnic and geographical backgrounds. By pulling stereotypes in the spotlight, this show promises to provide a filler-free night of uniquely funny, edgy stand-up comedy.

MRSOE! is coming to Charleston immediately following a successful 17 city Southeast Tour this past October and is proud to be a part of the 10th annual 2013 Charleston Comedy Festival!

The potpourri of hilarious comedians to perform includes:

This night full of entertainment will be hosted by comedian and producer Neil Bansil, Filipino-Canadian-American (Yuk Yuk’s - Toronto)

Head to the source at mrsoe.com