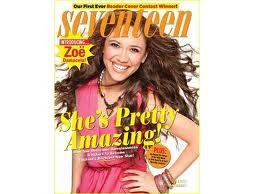 6:20 am on Friday October 14, 2011 | Posted by
YEScarolina brings Zoe Damacela, Seventeen Cover Girl and Owner of Zoe Damacela Apparel to Share her Inspirational Story with Charleston

Zoe Damacela has been featured on Oprah’s Angel Network, The Tyra Banks Show, Seventeen Magazine and even met President Obama in the Oval Office.  Growing up, life was anything but easy.  Zoe came from a single parent home, with a mother who was constantly struggling to make ends meet.  The two lived on food stamps and moved constantly, spending many nights sleeping in relatives’ guestrooms, on floors, and in basements.  “I didn’t know that things could be better,” says the teenager.

Zoe got her first sewing machine as a gift, and found her true calling as a young teenager.  She took a sewing class and made clothes for herself and her friends.

At the age of 14, Zoe began selling custom made clothes.  “I felt a great sense of pride because I made the money myself,” she says.  But the teenager didn’t have the business skills that she needed to figure out how to price her merchandise. “I was charging $40 for dresses that should have cost $250.”

So during her junior year, the teenager decided to enroll in the NFTE entrepreneurship course at Whitney Young High School.  “It totally changed my outlook on business, she says.  “NFTE taught me how to be more responsible and more focused.”  She created a powerful business plan for Zoe Damacela Apparel, which took top honors at the NFTE Chicago Citywide Business Plan Competition, and then went on to place 2nd in the NFTE National Youth Entrepreneurship Challenge.  This was the first time Jimmy Bailey, Founder of YEScarolina met Zoe.  “I was completely blown away,” says Bailey.  YEScarolina, a non-profit, is a program partner of NFTE, offering entrepreneurship training to the teachers of South Carolina at no charge.  Bailey knew what an inspiration would be to young entrepreneurs, so he asked her to come to Charleston for a series of speaking engagements.   Zoe will be attending a meet and greet at Taco Boy Downtown at 5 pm on Wednesday, October 19th.  This event is open to the public.

On October 20th, she will be a guest speaker at West Ashley High School and at St. Andrews Middle School.  In the evening, she will also be a guest of honor at the YEScarolina A Night at the Coppa Gala and Silent Auction.  She will be auctioning off a custom piece from her line.   Tickets to the Gala are $100 per individual and proceeds benefit YEScarolina programs.

On October 21st, Zoe will be at Mellow Mushroom Avondale for lunch and Halls Chophouse for dinner.