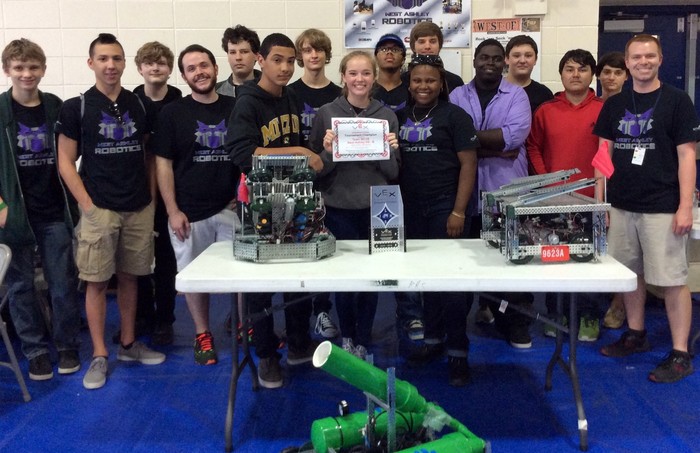 2:33 pm on Thursday April 14, 2016 | Posted by The Citadel
STEM Teacher of the Year taking state’s robotics champs to world competition

Their robots rumbled at the local, regional, and national competitions, and they returned to West Ashley High School as champions. Now, the school’s robotics teams are following their leader to the world competitions which will be held April 20 - 23 in Louisville, Kentucky. Their teacher, Nicholas Holmes is the high school’s mechatronics and trebuchet teacher, and was recently named the Air Force Association’s STEM Teacher of the Year for the Charleston County School District.

Holmes likes to keep his classes on the forefront of mechatronics technology. He is currently pursuing a Master of Education in STEM (science, technology, engineering, and mathematics), which is a new program offered through The Citadel STEM Center of Excellence.

“It’s a very exciting and constantly evolving field, but it is still not unusual to have to explain to the parents of my students what mechatronics is,” said Holmes. “Many of my students, though, are familiar with mechatronics when they enter my class. I want to know as much as I can about how to effectively teach them.”

Holmes explained that mechatronics is methodology for designing products that incorporate mechanical design with sensors and electronic controls. “We engineer small robots and then compete with them,” he said.

“He changed my son’s whole career path. When my son entered high school he wanted to work in the restaurant industry. After taking Mr. Holmes’ classes and learning what he can accomplish through science and engineering, my son has decided to pursue mechanical engineering instead,” said Allison Baumgardner, West Ashley High School parent.

Some of the awards Holmes teams have earned during the 2015-16 academic year include:

The Citadel’s M.Ed. in Interdisciplinary STEM Education is offered fully online through the Zucker Family School of Education, in conjunction with The Citadel STEM Center of Excellence, which is supported by both the school of engineering and the school of science and mathematics at the college. The goal of the program is to create leading 21st century STEM educators by facilitating a broader understanding of the interdisciplinary nature of STEM, a deeper knowledge of discipline specific content, and new integrative approaches for the teaching and learning of STEM content.