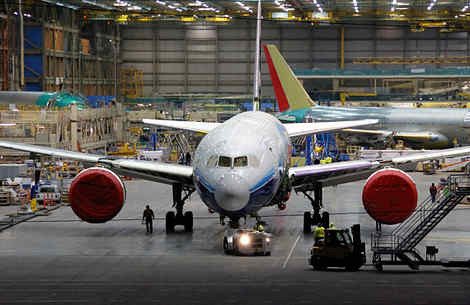 4:15 am on Thursday October 29, 2009 | Posted by
It's official! Boeing coming to North Charleston (morning after update)

Image by 20091021-boeing.jpg Not only does a Boeing plant in North Charleston look more likely, it suddenly looks like it might be larger, too.

Final update, the morning after:

Well not much has changed in the 12 hours since the deal was announced. But there's lots of worthy reaction.

The Post and Courier has some digging on the goodies South Carolina offered Boeing (which are estimated at a staggering $450 million) and a nice map of where the facility will go.

If you're interested in a timeframe, check out this piece at The Seattle Times.

If you'd like to get a sense for the fallout over in Washington, check out this quad of articles, again from The Seattle Times:

Needless to say, they're not too happy.

In a Tweet posted at 5:05 p.m., The Charleston Regional Business Journal reported:

and then, minutes later:

"The folks at Boeing have decided to build a plant in North Charleston, S.C." House Speaker Bobby Harrell from the House floor. #chsbrkg.

The Post and Courier has posted a story off the PRNewswire.

More from the CRBJ:

"This is a clarion call to people all over the world who are interested in doing business. Come to S.C." Sen. Glenn McConnell #sc #chsbrkg

To give you an idea how big this development is, incentives just approved by South Carolina require that boeing bring 3,800 full-time jobs and invest $750 million during seven years.

But it's worth pointing out that the total economic impact of the support and supplier jobs will likely be much greater than that. Also worth noting is that Boeing has seven years to creates those jobs, even then there is no absolute guarantee.

You can get a sense for how Washington's home team is taking it over at The Seattle Times.

Here's the press release for those that are so inclined.

The Post and Courier posted its breaking news on the announcement by having Warren Peper read it on a video. They've now posted a staff story on the deal. There's also a story over at CRBJ.

The Post and Courier's Yvonne Wenger reports that the S.C. Legislature stopped work on its incentives package this afternoon amidst speculation that an announcement could come at any moment.

And in another sign of impending news -- or the Apocalypse -- lawmakers were reportedly quiet when it came to chatting up rumors. The update is over at The Post and Courier, and worth a read. Stay tuned...

Things appear to be moving rapidly now as Boeing nears a decision on where to build its new assembly line for the 787 Dreamliner. Talks between the company and the machinists' union in Washington broke down Tuesday, and industry insiders are saying negotiations that could keep the plant in Washington are "over."

That's good news for North Charleston and the Lowcountry, but so are the figures included in the state incentives package that passed the Senate. To qualify for the full package, a new employer (hint: its initials are BOEING) would have to create 3,800 new jobs.

That's quite a bit more jobs than expected for the new Dreamliner plant -- raising speculation that Boeing might be considering moving additional production lines here as well.

Molly Parker from the Charleston Regional Business Journal has the breaking news.