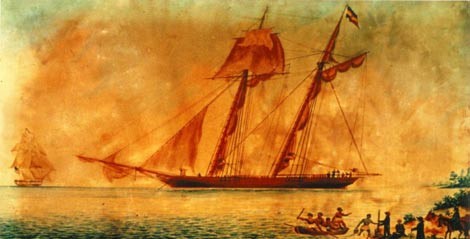 Image by UnknownImage by 20080728amistad.jpg The Amistad was just part of Sullivan's Island significant slave history, the bench and plaque were laid in hopes of reminding visitors.

In 1989 Toni Morrison remarked about her novel Beloved: “There is no place you or I can go, to think about or not think about, to summon the presences of, or recollect the absences of slaves . . . There is no suitable memorial, or plaque, or wreath, or wall, or park, or skyscraper lobby. There’s no 300‐foot tower, there’s no small bench by the road.”

Well, now there is a bench. It's on Sullivan's Island and is the first of 10 in the "Bench By The Road Project." The project seeks to mark spots of African American history that have significance in Morrison's novels.

Read more stories on this subject in our Slavery in South Carolina topic page.On Saturday, clad in white dress with yellow umbrellas to the sound of African drums, Morrison, 77, along with more than 300 people attended a memorial ceremony to the "Bench by the road" that marks the island where some 40 percent of the millions of African slaves entered the U.S.

The New York Times has an excellent write-up and photos of the event. Here's a clip:
“It’s never too late to honor the dead,” said Ms. Morrison, 77, the author of eight novels, as she sat down on the 6-foot-long, 26-inch-deep black steel bench facing the Intracoastal Waterway. “It’s never too late to applaud the living who do them honor,” she said. “This is extremely moving to me.”

Sullivan’s Island, home to Fort Sumter and Fort Moultrie, was a point of entry into North America for about 40 percent of the millions of Africans who were enslaved in this country. Carlin Timmons, a park ranger, said that all the estimates were rough, but that historians believe 12 million to 15 million Africans came to the Americas and the Caribbean. Of those 4 to 10 percent were brought to North America.

The Post and Courier offers a video that captures the sounds and feeling of the event, even if the sound quality is a bit bad.

Morrison was in town after performing a reading Friday night during the meeting of the Toni Morrison Society.