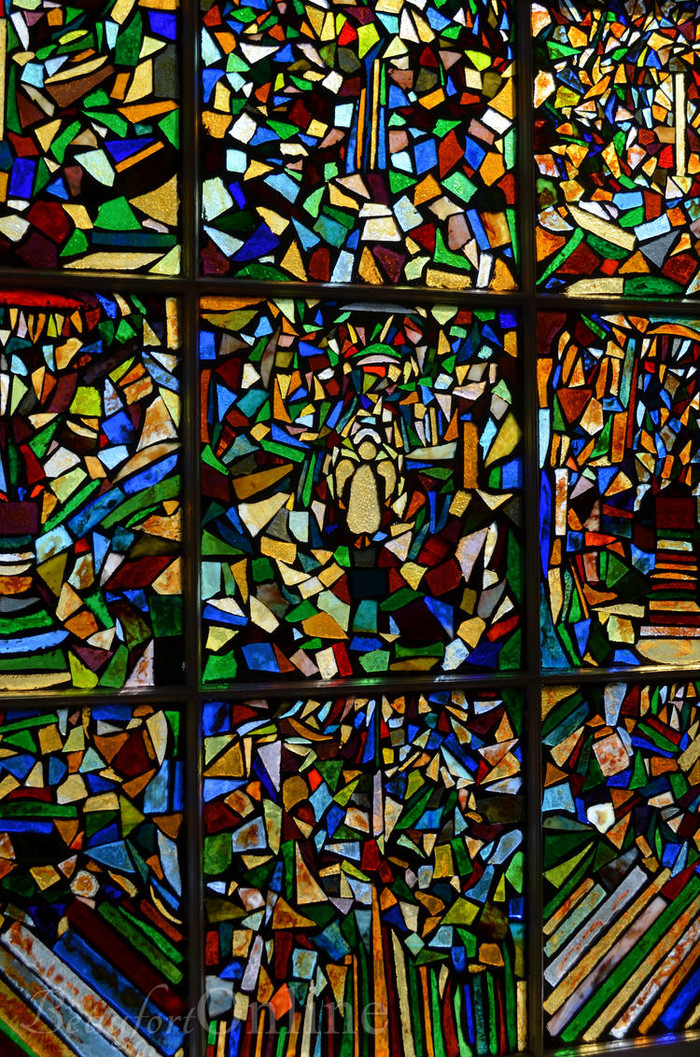 Previous to the Civil War, the tall building with the prominent white steeple at 911 Craven Street was used as a meeting/lecture/prayer house by members of the Baptist Church of Beaufort at 600 Charles Street.

The black members preserved a lot of what was in the church when Beaufort was occupied by Union soldiers. For example, a deacon saved the silver for the communion and put it between his bed

and mattress to keep the soldiers from stealing it. Freedmen (freed slaves) established themselves as a separate church body in 1863, and they were able to purchase the property on Craven Street for $700 in 1867. A beloved example of antebellum architecture and history, the Tabernacle Baptist Church is celebrating its 150th anniversary this year.

It’s not often that I pass the Tabernacle Baptist Church after dark, and I had never been inside during the day. While much attention is dedicated to the memory of war hero Robert Smalls who is buried in the graveyard, my attention has always been captured by the mosaic windows. Being back-lit windows, the colors are muted from the outside. However, on every sun-lit Sunday morning, church members sit among brilliantly colored pieces of glass that are arranged to tell Bible stories and depict African traditions. If the choir is practicing at night, the hypnotic, glowing view from outside has slowed many cars. From the perspective of a passerby, the bright colors symbolize that warmth and security can surely be found inside. So what is the story behind these enchanting windows?

Reverend Kenneth Hodges, pastor of the Tabernacle Church, referred me to Mrs. Lois Jenkins who was a past president of the Missionary Society for 32 years. Born in 1926, Lois had much to share about the history of the church: “I was born and raised in this church, so, every move, jus’ about. I think I’ve seen it all.” The steeple was added to the building in 1873, but had to be rebuilt after the Sea Island Hurricane of 1893. “This church have a balcony, that when I was a child, we knew exactly whether we were runnin’ late for Sunday School and church. All over Beaufort you could hear church bells ringing. You don’t hear anything now but the Episcopal church within the city limits- you don’t hear. Over where I live, you can hear the Catholic church bell ringing all day long- ‘cause they ring.” Lois now lives on family property on Lady’s Island where her paternal grandmother was born.

The mosaic windows were made by Mrs. Lizzie Lee Meyers, a native of Houston, Texas. Friends and family simply called her Lee. She married a Beaufortonian named Thomas Meyers, and they completed their family with a son named Tommy who is still living in Beaufort now. The few character references that I could find were all in agreement on three aspects of her personality: Lee was artistic, nurturing, and authoritative.  As a registered nurse at Beaufort Memorial Hospital, she worked in both the ER and in the neonatal unit. One section of the hospital was later named the “Lee Meyers Wing” in her memory.  In her free time, Lee was an all-around artist who made beautiful pictures, custom shoes covered in material and even restored furniture. Lee was only in her 50’s when she received a terrible diagnosis: “When she found out she had cancer, she made up her mind, being a nurse, she was not going to start taking the medication. She just gonna go when the Lord take her.”

During a storm, a tree had fallen into the back of the church, ruining the pulpit and two faux stained glass windows. Lee decided to dedicate the time she had left to the church by replacing those stained glass windows for the pulpit, never expecting to finish the windows for the whole church. Lee went to Charleston and took a course about making mosaic windows using stained glass, how to mix the materials and arrange the glass pieces. For materials, she contacted churches, even as far as England, that were tearing out their old windows so she could buy the broken glass for her project. Thomas Meyers set up a big table in their garage and laid the whole window sash (the bottom section) on the table. Lee drew and cut what she wanted for the bottom sash that she was working on. Her son Tommy Meyers also helped, making it quite a family effort. They laid out the colorful pieces on the existing glass until they were arranged properly.

See the Palmetto Tree in the center pane.

The new windows were installed in the church one by one, each taking about a month to complete. Several families in the congregation paid for the materials after they found out what she was doing, and brass name plates bear their names under the windows. You have to look for stories in the art, Lois told me, “It’s like putting a puzzle together.”  The first one that Lee created was the nativity scene, which the congregation sees to the left of the pulpit.  After looking carefully, you can see the head of Mary as she sits facing the manger. Joseph in his long cloak stands to the right looking toward the manger, each color a separate bit of broken glass. Like a painter from the Renaissance, Lee’s arrangements were symmetrical. She concentrated on the middle pane, and the colors and figures in the outside panes seem to balance like a mirror image. Along with biblical themes, she included scenery and a king and queen to represent Africa’s many rulers. Lois points out the entrance to Noah’s Arc and tells me to stand back. When you stand farther off, you can see the Palmetto, our state tree. Other members of the church have identified more pictures, but Lois tells me she spent a lot of time with Lee, learning the mystery of the pictures firsthand.

Other notable windows include a woman praying as she kneels in a tulip and an angel: “This angel, you can see it real clean at night.

Look for the angel in the center pane.

Everything else is in a dull color. That angel shows up brighter than any other piece in that whole section. At night, you see it’s beige now? But at night it’s pure white. So it must be the color that’s in those pieces of glass. That’s the only thing I can say. If Lee was livin,’ she would be able to explain it. But it comes out pure white at night.” Loving flowers, Lee used different varieties throughout the imagery, sometimes with a personal touch. Lois tells me that in Lee’s mind, a poinsettia can come in many colors. In the corners, she loved to show a ray of the sun shining toward the middle section of the window, and these rays are all enhanced with the sun shining outside.

After explaining much of the imagery from the pulpit and the sides of the church, we proceed to the entrance hall. Here, Lois’s voice becomes more subdued: “By the time she finished down here, she was beginnin’ to get real weak and sick, but she just prayed for the Lord to let her live until she finished.” The entrance is where the last part of her artwork was done. In late 1982-1983, Lee was getting so weak that friends arrived to work with her on the project.   “Out here several of us tried to help… The majority of the people who contributed to the windows are now gone.” Lois tells me that her family worked on the windows in the back corner of the entrance on both sides. Friends estimate that Lee Meyers spent three to five years making the mosaic windows for the Tabernacle Baptist Church, never thinking that she would live long enough to see them completed. However, with all the odds of her diagnosis stacked against her, Lee finished the windows and passed away just a few days after the last one was installed!

Her obituary in the Beaufort Gazette reads: “Mrs. Lizzie Meyers, 61, of 1101 Union St., died Wednesday [March 9, 1983] at Beaufort County Memorial Hospital. Services will be 1 p.m. Sunday at Tabernacle Baptist Church, Beaufort with burial at 10 a.m. Monday at Beaufort National Cemetery. Born Feb. 29, 1922 in Houston, Texas, Mrs. Meyers came to Beaufort in 1946. She was a member of the Tabernacle Baptist Church and served in the Missionary Society. She was a registered nurse at the Beaufort County Memorial Hospital. Mrs. Meyers is credited with painting the Tabernacle

I would like to thank Mrs. Lois Jenkins for sharing her memories, and I am not the first person to hear these stories of the past: “Every once in a while my children say, ‘Come on, tell us about Beaufort.’ We rode around down on the Point until it got dark. She said, ‘I guess people wonder what they doin’ here lookin’ into our yard?’ It got dark before we finished with our little tour, which is not the first time I took her down in there. I was pointing out the houses that became Robert Smalls Houses.”  Lois’s mother attended the funeral of Robert Smalls, and she [Lois] was friends with the great-granddaughter of Mr. Smalls. History lives on in Beaufort, SC.

See more pictures of the church at BeaufortOnline.com.

Head to the source at beaufortonline.com

They are impressive. Would you have an estimate on a price for a mosaic window? They are fascinating and beautiful, it's surprising actually to see that more we don't see them in people's homes as well. It's probably because of cultural reasons. The people at the window installation marin county ca would have some reviews to share on the matter. It's interesting to see how much you can learn just by reading these reviews.