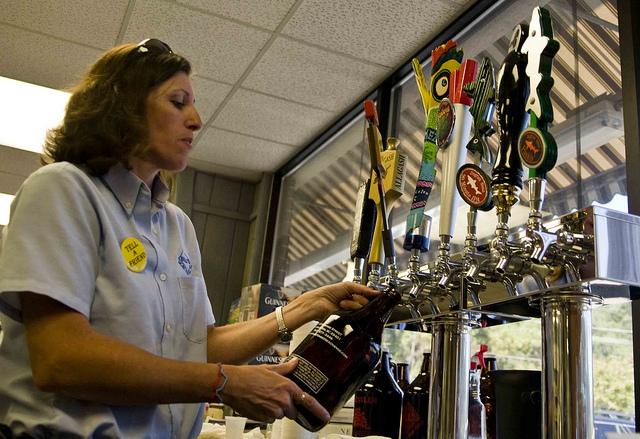 11:55 am on Friday October 15, 2010 | Posted by Ken Hawkins
Bill's Liquor gets into the fresh beer game with a growler station

Ken Hawkins/TheDigitel
I brought my own 64 ounce glass growler.

"Do you love good beer?"

That's the question Bill's Liquor's Doug Massalon is quick to ask when someone notices the eight beer taps in the Lady's Island store.

No, the Beaufort beer, wine, and liquor staple is not becoming a bar, they're doing "growlers." It's fresh keg beer served up to-go in a 64 ounce reusable glass bottle, not only do you get fresher beer, but you'll get beers you often can't find for sale in the bottle.

Me? I opted for the Great Divide Hercules Double Pale Ale (10% ABV, A- BeerAdvocate) for $13 -- most growler fills range from $11 to $20. (I'll save you some eyestrain from staring at the photos, currently on tap was Stone Smoked Porter, Algash Tripel, Palmetto, Victory Hop Devil, Dogfish 90 Minute IPA, Dogfish Pumpkin, and Duck-Rabbit Milkstout. But they're always changing kegs and I got the last fill of the Hercules and they added the delicious Ommegang Rare Vos amber, A-.)

The store opened the growler station on Monday, October 11, and so far they seemed pleased with community demand, one employee said, "We have more and more people every day, in fact I haven't moved from this station in 30 minutes." Perhaps that's not surprising as they're the only spot in northern Beaufort County selling growlers, something I wrote about with much sadness a couple weeks back.

Tastings are available and the spot will do more fledged tasting events every week or two and will be posting their keg lineup on Facebook.

New to the growler game? Drop by, they seem more than willing to chat about and will sell you a bit of glass for $3.99 ($4.99 tinted, if you'd like to keep the beer longer) and will be swapping in new kegs every time one blows.

Keep up with area beer news on our topic page.