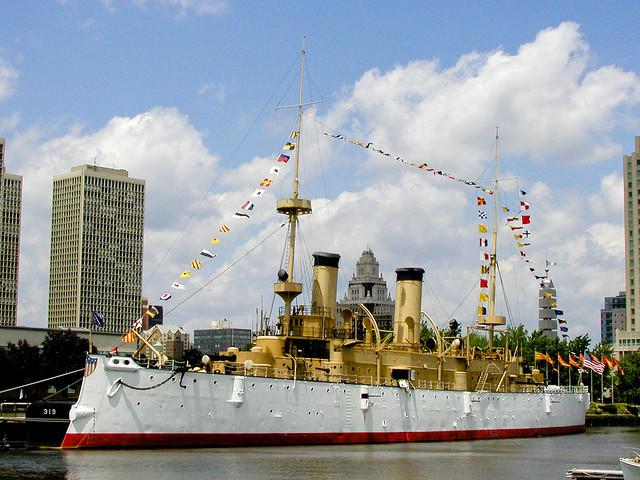 Update November 29: The Island Packet has followed up again and notes that the field of competitors has narrow, with the Port Royal effort being one of only two bidders left.

Update February 6: As we near the year anniversary of the effort to bring the USS Olympia to a Parris Island, The Post and Courier is calling attention back on the idea and lending it's support with a short editorial; read it here.

Update November 12, 2011: The group is asking for more time to secure the funds needed to acquire the USS Olympia.

Updated June 14: We've seen more 'urgent' emails circulating calling for donations to help save the USS Olympia. Organizers are calling for a $10 donation; you can add your money to the pool here.

Also came across a YouTube video, actually just a glorified slideshow, detailing this effort. You can check it out below.

And the cruiser commissioned in 1895 already has a half-dozen interested takers, including a Beaufort-based "S.C. Olympia Committee" that hopes to secure the ship that was pivotal in the Spanish-American War and preserve it in dry dock on Parris Island.

[The ship was the flagship of Commodore George Dewey at the Battle of Manila Bay.]

The Island Packet has a nice report with some good local angles (read that here), and The Post and Courier also has a report that addresses some of the "making it a reality" questions better (read that report here).

And it doesn't help that South Carolina is already going through the pains of one financially ailing naval museum, Patriots Point.

We'll be sure to keep you updated, and you can engage the group directly on their website.