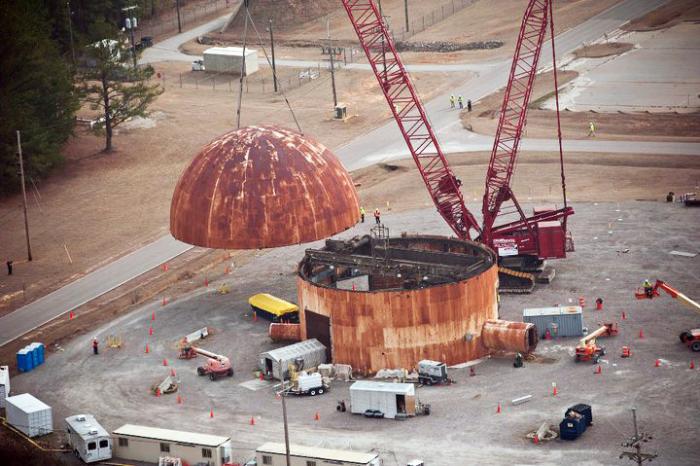 The landscape about 100 miles from us just took another step away from the Cold War.

Affectionately known by SRS employees as “Hector,” the iconic Heavy Water Components Test Reactor (HWCTR) has stood in the Site’s B Area since 1959 as a testament to the nation’s nuclear age and evidence of SRS’ valuable contribution to it.

“While HWCTR has always served as a landmark to the tens of thousands of people who have worked at SRS since the reactor was built, its decommissioning is a clear sign of the Site’s commitment to cleanup and new missions,” said Dr. David Moody, manager, U.S. Department of Energy-Savannah River (DOE-SR).  “The view from many windows onsite won’t appear the same today, but the sight is one of progress and pride as the Recovery Act at SRS moves toward reducing the site’s footprint by 75-percent.”

Preparations for the dome removal and reactor D&D began in October 2009.  Since then, Savannah River Nuclear Solution’s (SRNS’) crew of approximately 35 employees — including riggers, mechanics, engineers, designers and crane operators — guided the project to this day.

To enable today’s dome removal, three lifting lugs were attached to its surface and the upper portion of the structure was cut loose, leaving a 29-foot-high base around the circumference of the reactor building.  A 660-ton crane with a 200-foot boom was used to lift the 174,000-pound dome by the lugs before setting the structure on the ground nearby.  It will later be cut into smaller pieces before being placed in the Site’s E-Area low-level waste slit trenches that make up the burial ground.

The dome removal is the first and most visible stage of the reactor’s decommissioning.  This will allow access for the removal and disposal of the remaining reactor vessel, weighing 219,100 pounds, and two steam generators, each weighing 41,600 pounds.  Remaining equipment will be moved to the cavity vacated by the reactor vessel, the below-grade portion of HWCTR will be filled with grout and the 29-foot-high base from which the dome was cut will be removed.  In the final stage, a concrete cover will be placed over the reactor’s footprint, officially marking the end of HWCTR’s decommissioning.  Completion is expected this summer.

Recent preparations for the dome removal include cutting interferences that spanned the 29-foot cut elevation and securing or removing items that could fall during the dome lifting.  Earlier in the project, the reactor vessel and steam generators’ pipes were cut and prepared for transportation and final disposition.

HWCTR’s mission was to test experimental fuel assemblies for commercial heavy-water power reactors.  In 1964, the U.S. government decided to pursue other reactor designs for commercial electrical power generation, and HWCTR became an inactive reactor. At that time, fuel assemblies were removed and systems that contained heavy water were drained. Fluid piping systems were drained, de-energized and disconnected, and the spent fuel basin was drained and dried.  The reactor building remained sealed for 30 years, until the mid 1990s when retired SRS engineers who worked at HWCTR reunited to enter the reactor to document how the reactor functioned and identify possible hazards.  Their efforts aided in future planning of the facility’s closure.

This $25-million reactor decommissioning and deactivation project is funded By the American Recovery and Reinvestment Act.

You can view more photos of the dome removal on the Savannah River Site's Facebook page.