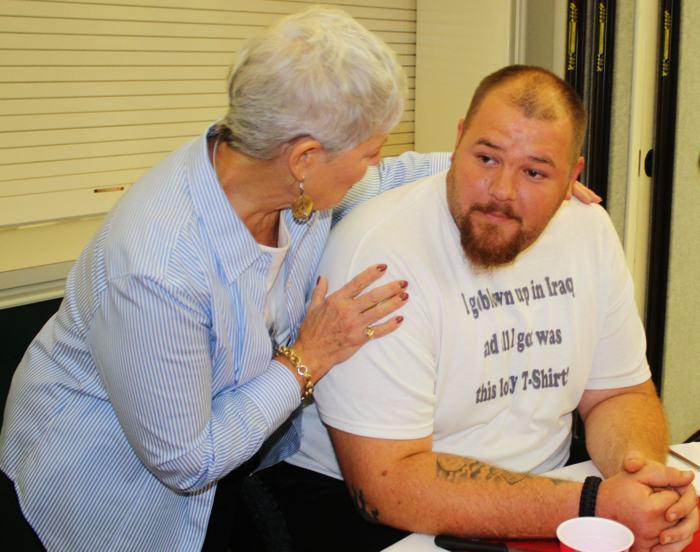 "Never before have the one percent who wear the uniform done so much," said Col. Stuart Wagner, USMC retired and former chief of staff at Parish Island Marine Corps Recruit Training Depot, Parris Island.

Wagner was addressing nearly 100 wounded warriors who fought in the wars in Afghanistan and Iraq and their caregivers. They came from as far away as the California coast, Texas, and Pennsylvania. And they were grateful for the reception they received in Beaufort. "We are really thankful for what this community does for us," said Hector Medina of Anaheim, California, who served in U.S. Army infantry in Iraq. "This is really fantastic."

Following a Wounded Warrior Dinner at the Parish Church of St. Helena (Episcopal) on Friday, September 16﻿, the warriors were transported to Beaufort's Waterfront Park, where they were honored as part of the Lt. Dan Band concert to benefit the Independence Fund, which supports wounded veterans and their families.

About 80 St. Helena parishioners, including Wagner and other retired officers and enlisted men and women volunteered to serve the warriors at the dinner. The Rev. Jeff Miller, rector the Parish Church of St. Helena, told the assembly that the church, has embraced the military community in its nearly 300 years, and it would continue to support men and women who fight America's battles. "There is not a Sunday that I climb into the pulpit to preach that I don't think of the sacrifice of military men and women who fight our nation's battles to ensure that we have the freedom to worship as we do. God bless you."

Col Stuart Wagner (USMC retired) addresses wounded warriors at the dinner. Wagner is a former chief of staff at Parris Island.Wagner compared the men to the firemen who responded to the disaster of New York's Twin Towers on September 11, 2001. "But the firemen saw the disaster before they went into it; they knew what they were getting into; they made a decision – 353 of them didn't return home.

"Like the first responders, you made a decision. When you volunteered, there was no doubt where you were going. You wrote a check to our country:
"To: The United States of America
"Amount: Whatever it takes –

"And you have kept that promise for 10 years, and counting. More than 2 million of our soldiers, marines, sailors and airmen have written that check . . . Hundreds of thousands have deployed again and again, year after year. The average combat deployment for Camp Lejeune is four times – never before has our nation asked so much of our volunteer military force.

It's not only the wounded warriors who have paid a price, Wagner said, "so have your families."

"It is fitting to ask here tonight: Where do we get these wonderful caregivers wo turn their lives upside down ... to become our chauffeur, cook, case manager, therapist, personal shopper, nurse, legal aide, job coach, and most importantly our friends?"

More than 6,000 families have buried their loved one killed in Iraq and Afghanistan, Wagner said. Almost 44,000 have been wounded. And hundreds of thousands of others suffer from invisible wounds.

"...We honor our wounded warriors and their families. We will never forget that they are in our community, sprinkled throughout small towns and big cities. And we will not let their sacrifices go unknown or be forgotten," Wagner said. The quality of courage is important, because "it is the cornerstone that preserves all the others," Wagner said. "God bless you, and God bless America."