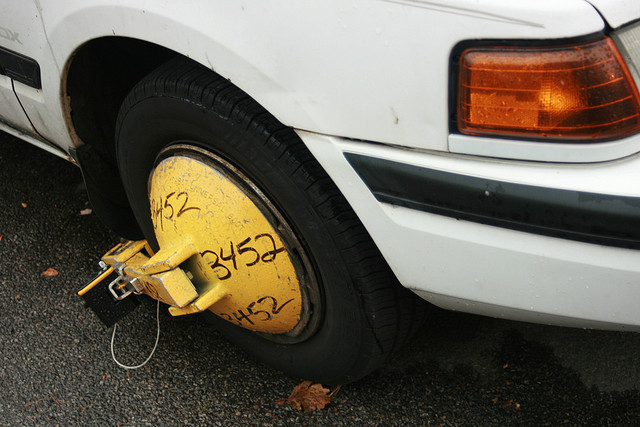 2:33 am on Tuesday May 3, 2011 | Posted by Ken Hawkins
No easy consensus in proposed Beaufort County tow truck rules (update: getting there)

Flickr user quinnanya
Much of the debate focuses on the practice of booting — which doesn't remove cars from hazard areas.

Update May 3: Slowly, but seemingly surely, the general proposal talked about for months (see below) is inching forwards.

At a Monday county committee meeting the general idea of caps and regulation for various services received a thumbs up and should soon be before the full council.

The Island Packet has a solid update; read it here.

Update April 10: Much like a broken down car that needs to be towed, this debate seems to be moving at a snail's pace.

Still, a consensus over what to regulate and how much fees should be capped at is growing, though many council members still want more time to get input. So maybe this time next month council will have taken action.

Head on over to The IslandPacket for a rundown on what's up.

So where are we? I'll compare it to the point when you've finally gotten a call that the tow truck is headed out from the office and nearly on the scene.

First reporting, February 9: In the wake of the Christmas Eve tow trucker shooting of Carlos Olivera, Beaufort County has been looking into better regulating the industry and its fees.

As expected it's not proven an easy dialog and the county appears to be early in the process trying to decide what and how things should be regulated.

My preferred report on the matter comes from Bluffton Today which does a good job showing the disunion on the matter; take a read here.

Update February 9: WTOC has added a video report on the matter. For those of you that don't like the word-oriented reports linked to above, watch a video here.