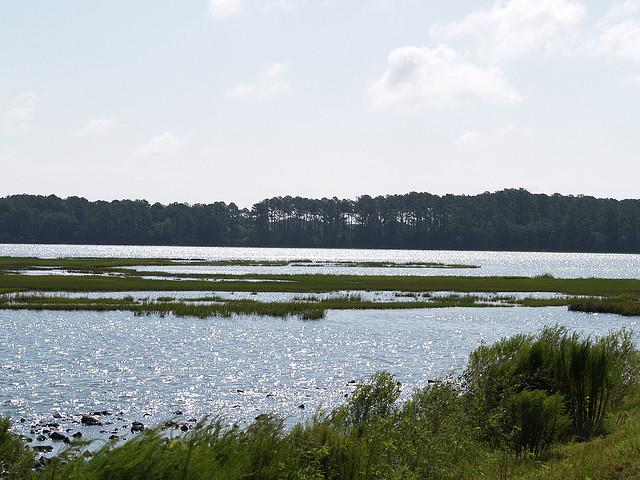 Flickr user evilgurl
The unspoiled marsh off Parris Island in a file shot.

Update December 10: Many Beaufort area oyster beds have been closed.

We just received word that a sewage spill of an estimated 90,000 gallons into the Beaufort River was due to a broken pipe on December 7 and was detected on Parris Island today.

Below is information from a Beaufort-Jasper Water and Sewer Authority release and there does not appear to be any immediate health concern, though we're following up and will let you know of any pertinent developments.

DHEC has yet to weigh in on any closure of area oyster beds.

A map of the break location and marsh entry is below.

An estimated 90,000 gallons of wastewater has overflowed on Parris Island near Panama Street and New Britain Street. The overflow was found on December 9, 2010, and was  stopped that afternoon.

Beaufort-Jasper Water and Sewer Authority (BJWSA) estimates that the leak began on December 7. The overflow occurred because of a broken sewer pipeline that leaked into a nearby storm drain system at the same intersection. The storm drain system outfalls to the Beaufort River approximately 200 feet east of the intersection of Panama and Nicaragua Streets on Parris Island The sewer pump station associated with the leak has been temporarily taken out of service to stop the overflow, and the pipeline is being repaired.

BJWSA has notified the SC Department of Health and Environmental Control (SCDHEC), and is working in conjunction with SCDHEC to mitigate any effects caused by the overflow. Signs notifying the public of the sewage spill will be posted at the Nicaragua Street storm drain outfall.

BJWSA has a well trained and experienced field operations crew to operate, maintain and
monitor our wastewater collection system. These crews are responsible for the safe daily delivery of an average of 6.5 million gallons of wastewater to multiple wastewater treatment facilities for treatment and disposal.

BJWSA’s Sanitary Sewer Overflow (SSO) Notification Program is designed to educate and
notify the public about releases from BJWSA’s wastewater system. The program uses the
website and signs posted at overflow sites to provide information to interested and affected
citizens.