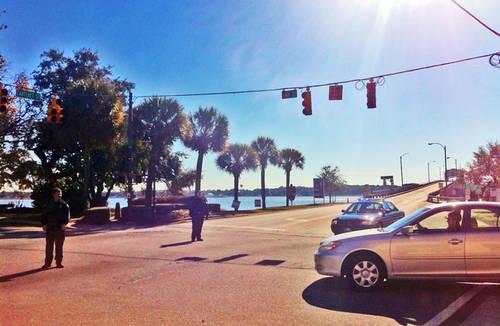 TheDigitel
A file photo showing the old wire-hung lights at the intersection.

Update May 7: With many months behind us, the upgrades to the intersection are nearly complete with the new lights about to go active — and an eye-in-the-sky curiosity: three cameras.

Traffic cameras in Beaufort? Surely not — especially given how controversial they are of late.

Luckily for the sanity of local politicians, these aren't the traffic ticket giving type, nay, they're the type that pair with computers to do a better job sensing when (and how many) cars are in wait and how many frustrated pedestrians are in queue.

The Island Packet has a nice rundown of how, what, and why; read it here.

As for whether or not the system will work at the oft-congested intersection, time will tell.

First reporting January 5: The traffic light at Carteret and Bay streets has always perplexed me a bit: It's at the crossroads of a heavy walking tourist area between Bay Street's core commercial area, the Woods Bridge, and the start of the historic homes at the point.

Yet the traffic lights and walk lights look like they, too, fell out of the history books.

Well, that's all set to change as the S.C. Department of Transportation, the City of Beaufort, and Beaufort County spend $150,000 to upgrade the traffic signal mast to a type similar to those used in areas of Port Royal which provides a stronger, longerlasting way to hang the traffic signals.

“This is one of the key intersections in Beaufort,” City Manager Scott Dadson said. “We havetalked about removing some of the visual clutter, starting with the traffic signals that just kind ofhang there along with the power lines and phone lines. Now we are doing it. In the springtime, we’llbe adding new streetlamps as well.”

Construction is set to begin next week and traffic delays should be minimal with the only marked increased noise coming from a diesel truck.

Other work at the Bay and Carteret intersection includes Hargray crews boring a conduit parallel to Carteret from Bay Street to the Woods Memorial Bridge, under Cannon Park parallel to Bay andthen a short ways down New Street. At that point the conduit becomes aerial on existing poles.