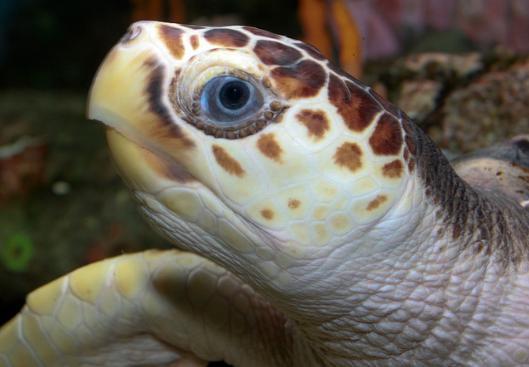 Updated February 14: The South Carolina Aquarium's blog has a nice update on Frosty the Turtle, one of the most severely injured turtles being treated by the Sea Turtle Rescue Program as a result of our unusually cold winter temperatures down here.

Frosty was rescued from a Hilton Head Island beach on Dec. 15.

The blog post has some incredible photos of Frosty, including the frostbite suffered to his flipper. But according to the post, Frosty is indeed doing well. Give it a read here.

Update December 27: The Island Packet has a local report on how the cold weather also is impacting starfish and shrimp.

You can read the brief report here.

Update December 16: And the trail isn't over as another juvenile green sea turtle was found cold stunned on Hilton Head Island Wednesday morning.

The turtle was transported to the South Carolina Aquarium's Sea Turtle Hospital, bringing the total number of patients to 19, a new record.

Kelly Thorvalson, the Sea Turtle Rescue Program Manager says this latest case is interesting because sea turtles don't usually get cold stunned in South Carolina waters.  Patient #19 comes to the Sea Turtle Hospital just days after nine new patients were admitted after being found cold stunned in North Carolina waters.  The turtles will remain in the Aquarium's care until they are medically cleared for release.

Last year the Sea Turtle Hospital cared for six cold stunned turtles.  The average length of stay for a sea turtle in rehabilitation is 7-8 months.  When a turtle is deemed healthy enough to survive on its own, it is brought to a local beach to be returned to the ocean where it can rejoin the sea turtle population.

When sea turtles are exposed to cold water temperatures for long periods of time they undergo a hypothermic reaction.  Symptoms of that reaction include a decreased heart rate, decreased circulation, lethargy, all followed by shock, pneumonia and in the worst case scenarios, death.  Sea turtles are affected by cold stunning because they are cold-blooded reptiles that depend on their environment to regulate their body temperature.  Because of that, in cold weather they don't have the ability to warm themselves and that's why in the winter sea turtles migrate to warmer waters typically around the end of October.

First reporting: The State has an interesting report on how sea turtles are washing up along the East Coast, specifically North Carolina, stunned and in general poor health due to the frigid temperatures being experienced throughout the Southeast.

According to the story sea turtle experts in N.C. are asking for help from aquariums in Charleston and Atlanta to deal with the loggerheads, specifically the Georgia Sea Turtle Center and the S.C. Aquarium Sea Turtle Rescue Program in Charleston.

Check out The State story here.