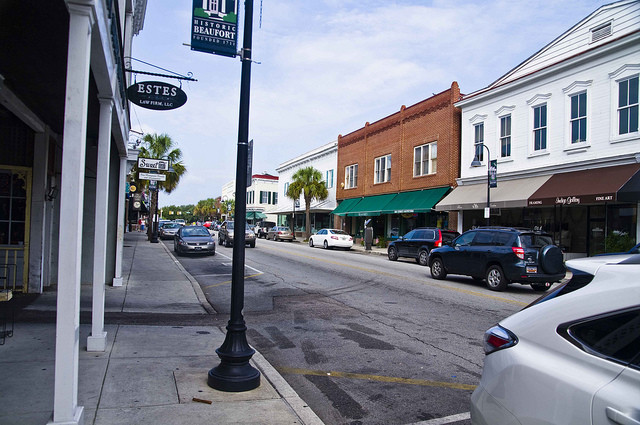 Much of Bay Street will be closed as the street gets a new layer of pavement.

Several roads in the Beaufort area (including parts of the busy downtown thoroughfares that are Bay, Charles and North streets) will be closed at various periods over the next several weeks as construction crews performan maintnance and resurface roads.

Contractors for the S.C. Department of Transportation will need to close several Beaufort roads, including downtown Bay Street, for repaving starting next week.

Beaufort City officials learned of the paving schedule on Monday via the contractor and have begun the process of working with local businesses and city departments to try to make it a smooth project.

“We are mindful of the concerns being shared about this paving schedule and we are forwarding them to the state DOT. We are trying to make the best of this work by the state on state-controlled roads,” Beaufort City Manager Scott Dadson said Wednesday.

“We need to be aware as the state starts this project that most local schools re-open on Monday, so there’ll be added traffic on all our roads,” he said.

The milling, resurfacing and re-striping likely will require a three- to five-day closure of Bay Street the last week of August. City leaders are meeting with downtown businesses to discuss alternate days or locations for deliveries, etc., and alternate parking options so customers can still access Bay Street merchants.

Following the resurfacing, street work will also include installation of new overhead traffic signal masts arms on the Charles Street corridor at the intersection of Bay, Craven, and Boundary Streets.  These installations however, will require only temporary road closures to position materials and equipment.

“This is an aggressive schedule covering a lot of areas, so we’ll be coordinating our crews with the SCDOT’s contractor and Beaufort Police,” said Isiah Smalls, director of public services and facilities management for Beaufort.

City officials will allow a variance to Beaufort’s noise ordinance so that work may begin as early as 7:30 a.m., Dadson said.

“Motorists should use extra caution until this work is done, because some of the familiar traffic patterns may change and we’ll also have children walking to school and buses back on the roads,” he said.

The roads need to be resurfaced and paved prior to installation of the new traffic mast arms in the Charles Street corridor downtown. That project is expected to take about eight weeks and is set to start mid- to late September, Smalls said.

“The paving of the street needs to occur first to avoid cutting the new loop detectors and other traffic control devices that will be installed as part of the traffic mast arms installations,” he said.