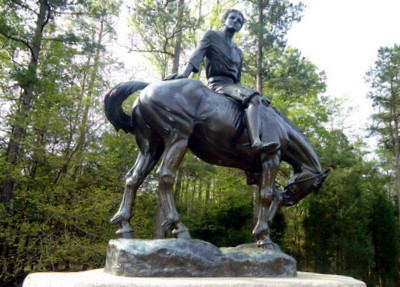 It was recognizable across a wide field; a statue near Rock Hill of a young Andrew Jackson on a horse had to have been made by Anna Hyatt Huntington.

After closer inspection of the handsome work, and with the help of visual aids and explanations from the South Carolina State Park Service, the piece is indeed by Huntington. She was a noted American sculptress who lived from 1876-1973 who established Brookgreen Gardens in Murrells Inlet, which is the largest outdoor sculpture garden in the world. She and her wealthy husband, Archer Milton Huntington, also donated the land across U.S. 17 from Brookgreen to found Huntington Beach State Park.

So anyone who is familiar with Brookgreen Gardens and Huntington Beach know the look of her sculptures. Horses figure heavily in her work, and a good example is the piece titled Fighting Stallions (c. 1950) at Brookgreen's entrance. In Huntington Beach State Park is an old Moorish castle (which was actually shipped from Spain) called Atalaya that was the sculptress' winter home. A big chamber inside Atalaya was her sculpting studio, and it was complete with cages and chains to contain live animals such as horses and even bears that she could study as she sculpted.

The statue near Rock Hill is in Andrew Jackson State Park. Jackson was the only U.S. president native to South Carolina, and he was born near the park in Lancaster County.

In 1962 a movement was started to encourage Lancaster County schoolchildren to send letters to Huntington and ask her to create a statue honoring Andrew Jackson in time for the 200th anniversary of his birth in 1967. Huntington wrote a letter dated June 20, 1962, to Lancaster County Historical Society Commissioner, Nancy Crockett. It said:

I have your interesting letter of the 6th with appreciation of Brookgreen and I am glad you know the gardens.

Your suggestion of Andrew Jackson as a young man growing up among the rural activities of a small frontier town, is the only side of his life that appeals to me as a sculptor, as well as the interest the children seem to have in the project.

Its a quiet composition but think has possibilities.

When I get the model further developed I will send you a small snap shot to see what you think but it would be some years before it could be developed as I have other work promised.

The piece was finished in time for Jackson's 200th birthday when Huntington was 90 years old. It weighs 25,000 pounds, and the granite base bent the crane when it was being installed.

The Boy of the Waxhaws

This statue of the young Andrew Jackson is a gift to the children of South Carolina by the sculptor, Anna Hyatt Huntington. Children of the elementary schools throughout the state contributed their nickels and dimes for the base.