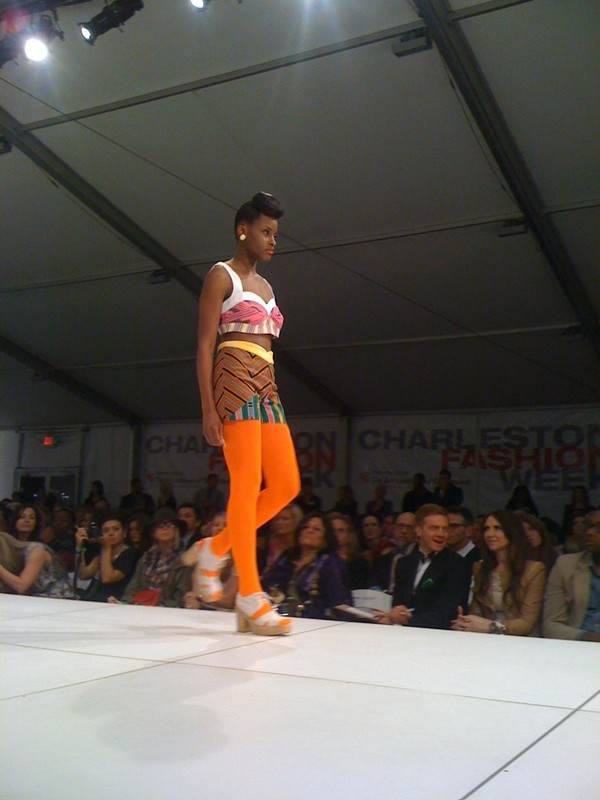 There was energy about Friday night that I couldn’t quite put my finger on. Perhaps it was the amazing music being spun by the likes of Jeff Turner and DJ Sonar, or maybe the entire buzz surrounding the last group of Emerging Designers? Either way, people were really excited to get the show on the road.

In the retail department, Sucker Jeans made a great start with a re-imagined collection of their signature seersucker “jeans”. “The cut of the jeans look a lot better this year”, said Elizabeth Bowers, writer for Charleston Scene. Granted, I did agree, but I’m not exactly ready to get on the seersucker train yet; linen is more my style. Next Mary Mojo shared the stage with The Shoe Fairy to bring out a collection of prints and bold colors for the spring /summer season. A great deal of their collection made me think that their clothes were best suited for young, 30-somethings who need outfits for that weekend trip to South Beach; pretty standard but practical.

Unfortunately, Biton had me yawning once again this year. I’m still on the search for some decent menswear in the Holy City that doesn’t make me look like I’m an extra in a P. Diddy music video. Conversely, their women’s wear made the cut with lightweight fabrics and military style outfits.

Gwynn’s collection looked like it drew from some Native American sources with its skirts and dresses. Much of it was casual and relied heavily on neutral colors until the last three pieces or so. They’re consistent in providing their audience with the clothes they like most, so I can’t be mad if they didn’t have me on the edge of my seat.

In regards to the Emerging Designers, La’Daska Powell fell short with her collection of swimsuits not because of poor design and execution, but because so much more emphasis was placed on the shoes each model was sporting down the runway. Some of the heels reached dangerous heights of 5 and 6+ inches. Thea Canlas, a modest designer, decided to draw inspiration for her line from the patterns and fabrics of her Vietnamese background. They were jazzy at best but she rebounded with the use of bright, neon colors that are sure to get the attention of a hipster girl or two. Isabel Crosby, a petit little thing, had a collection that screamed industrial and utilitarian. It was sort of lumberjack meets punk. I wish I could have gotten a better feel for her collection, but her models were walking so fast, I could barely keep up.

Now that we’ve gotten all of the pleasantries out of the way, let’s focus on the most outstanding talent of the night. Charlotte Hess, the People’s Choice and overall winner of the night’s competition, pulled out all the stops with her unabashed craftsmanship. She didn’t bother herself with premade fabrics and such, no; she hand-knitted each and every one of her pieces into sheer works of art. The favorite was a bohemian-style, knitted white dress that could be easily used as a wedding gown. It was flawless.

Rounding out the night was designer, April Johnston, who has had her work shown in countless venues including the Lincoln Center. Inspired by a darker side of life, Johnston’s pieces invoked a sense of apprehension that was both jarring and intriguing.

Saturday is the finale where anything can happen. All of the designer finalists get to showcase the entirety of their collections in the hopes of becoming the absolute winner of the Emerging Designers Competition. I’ll be under the tents to catch every moment of it.