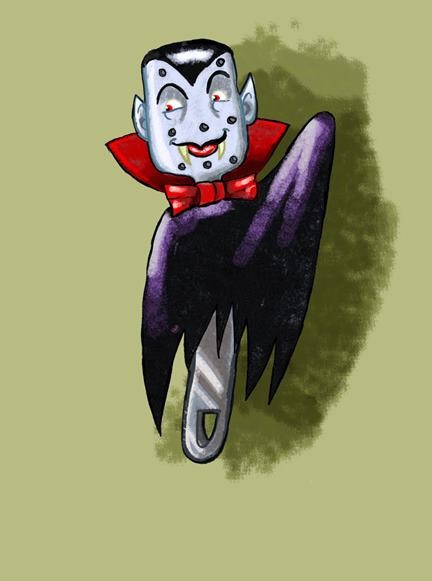 Update September 24, 2012: Even though Lee Newman's Kickstarter didn't meet the original funding goal, he still pressed on with illustrator Dan Houser to finish the book.

You can pick up a copy here from DriveThruFiction.com

Interestingly, Creepy Kitchen isn't the first bootstrapped children's book to come from the Grand Strand. Just a couple months ago, we reported on Bob the Ladybug project as well.

First Report: Myrtle Beach resident, Lee Newman, has written a children's book, "Creepy Kitchen" and has created a Kickstarter campaign to raise the funds required to get it published.

From the Kickstarter page:

Creepy Kitchen is a children's book about one man's very reluctant role as tour guide through his haunted kitchen that is populated by parodies of famous monsters. I really wanted to write a kid's book that also had a level of humor parents could enjoy.

Count Spatula, Whiskwolf, and the Teaspoon from the Black Lagoon are just three of the characters the homeowner and his dog encounter.  Illustrator Dan Houser make them come to life on the campaign page.  To really get you behind the project, Lee Newman encourages possible backers (and everyone else) to dowload the story to read and share here.

The goal is $4500, which would pay for the first 100 copies and cover expenses, such as illustrator fees and gifts for backers.  The goodies range from a high-five to oodles of copies and a private reading to your child's class or at a party.  The campaign ends on August 10, 2012.