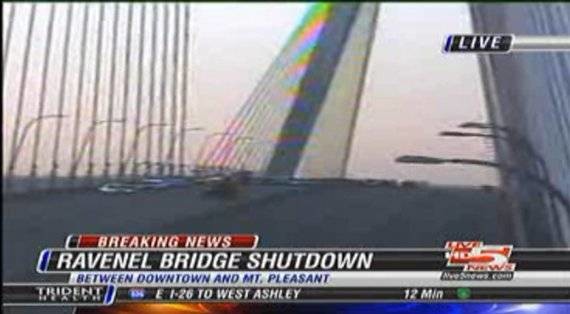 5:58 am on Thursday March 22, 2012 | Posted by Amanda Click
Man arrested after attempting to drive SUV off Ravenel Bridge (Update: Requests trial by jury)

Live 5 News was live steaming from the scene on Thursday.

Update March 22: Instead of appearing in Charleston Municipal Court on Wednesday for his antics on the Arthur Ravenel Jr. Bridge, Philip DeClemente has requested a jury trial on his reckless driving charge.

The Post and Courier reports that the trial date has not yet been set.

Update February 3: It took about three hours, but after traffic came to an abrupt halt on Thursday things began to flow again shortly after 6 p.m. with 38-year-old Phillip DeClemente﻿ in custody.

But it wasn't until 8 p.m. that the massive traffic headache had cleared.

Patch has a solid round-up report, including what little background is known about DeClemente other than apparently he had fallen on hard economic times.

Also worth a mention is aerial video of the scene from a helicopter.

First reporting: The Arthur Ravenel Jr. Bridge was closed in both directions just before rush hour for a serious incident involving a driver in a white SUV threatening to jump off of the bridge.

The man, who was taken into custody by a S.W.A.T. team around 5:20 p.m., stopped his SUV on the top of the bridge and according to police, was threatening to hurt himself. To make the situation more intense, scrawled across the side and rear window were the phrases, "Game Over," "Stay Away" and "Happy Now."

Motorists who were caught on the bridge were evacuated from their cars while police surrounded the vehicle. In one desperate attempt to jump the side of the bridge, the man in the SUV floored the gas pedal and rammed a barrier. Luckily, nobody was injured and the barrier stopped the man from doing any damage to himself.

Live 5 News is currently live steaming, The Post and Courier has the best photos from the scene including a close up of the SUV with ominous writing .

Traffic is backed pretty much everywhere and all commuters should expect major delays.