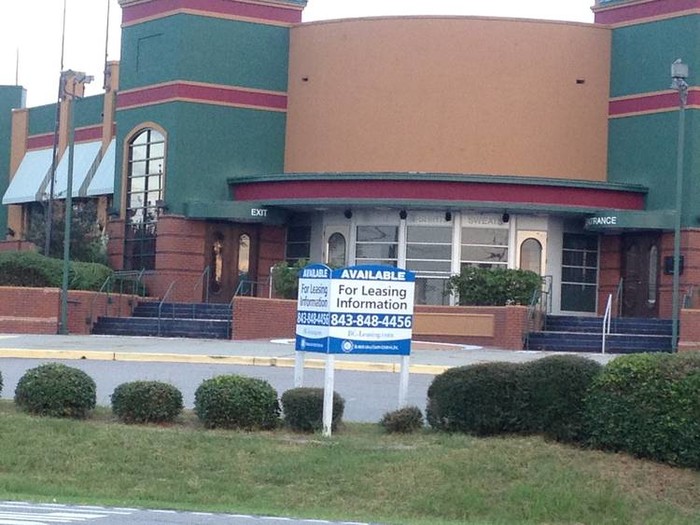 The dream is dead?

Out front of the former NASCAR Cafe and two-year-in-progress, future home of the Pat Boone Family Theater was a for lease sign. We're not sure how long the sign has been up but emails and messages have been sent to those within the Family Theater organization (none sent to Mr. Boone himself). If the web is any indication of progress on the theater, their Twitter account hasn't been updated since December 2011 and their website, well, their website look like this.

The Family Theater has had troubles almost from the begining, and you can read all about the history of the PBFT below.

We'll keep you posted. Maybe. Probably. Sure, why not?

Update 6/1/12:  What started about two years ago still seems to be in a holding pattern.  The Pat Boone Family Theater hasn't made much progress, but there's still hope.

According to this Sun News report, they were granted a 90-day extension on their construction permit, which expired on May 22, 2012.

Update 10/3/11: Pat Boone Family Theater has issued a release that confirms the opening delays and they have no target opening date set at this time.

Glenn Milligan, managing partner of Liquid Metal Holdings, the theater’s parent company, cites the loss of the headlining magic act and construction as reasons for the delays.

“Renovating the space from a vacant restaurant to a live performance theater is a huge project,” says construction supervisor Nick Doria. “We’ve had some unanticipated issues come up that required immediate attention and much time. We have already accomplished a lot of great things in the building, but need to get everything right before the theater opens.”

For the back story, scroll down this page.

Update 9/5/11: According to a news release, the headlining magic act for the theater has "parted ways" with Pat Boone Family Theater. But it appears there may be more to the story.

This is just another obstacle the theater has had to overcome (see below). The weird twist is we first heard of this from a news release originated by Strebler but The Sun News seems to have a different source, Glenn Milligan, that represents the Pat Boone Family Theater. This source also happens to be Strebler's father.  Regardless, Milligan maintains the theater is on track to hit it's October opening date.

Morgan Strebler also commented in his release that he intends to perform in the Myrtle Beach area after his non-compete agreement has expired. In the meantime, you can follow his twitter account or website for updates on his upcoming shows.

Update 8/24/11: Driving past the former NASCAR Cafe one can see the remodeling for the Pat Boone Family Theater is going slow.

Missing their late summer target opening date, the Pat Boone Family Theater is now scheduled for an October opening date. Boone will not be on hand for the grand opening, hop on over to The Sun News for the full write-up.

Update 6/21/11: Myrtle Beach Alternatives has a bit more on the schedule for the PBF Theater also the date given for its grand opening is 'August.' Check out the Boone performance schedule -Pat himself will be performing for two weeks a year.

Update 6/7/11: Carolina Live has a piece on the headliners that are and might be coming to The Pat Boone Family Theater. Hop on over to take a look.

First Report 5/30/11: Scheduled to open a year ago, the Pat Boone Theater is finally starting construction. Located at the old NASCAR Cafe the theater will have an illusionist, gospel and Christmas shows as well as other family friendly events.

Finally securing funding of the needed $1 million dollar cost of the renovation the theater will also be home to a museum dedicated to Pat Boone memorabilia and the "Illusions ultra lounge" which will be a late night hang out for adults to gather to hear live music. The Illusions ultra lounge will be in keeping with the "family friendly" theme -so we're guessing no alcohol?

The Sun News has the full story on the Pat Boone Theater, including their financing problems and information on the projected opening dates for the theater and other attractions.

Some of our younger readers might not know who Pat Boone is, so head on over to Wikipedia and read all about him.