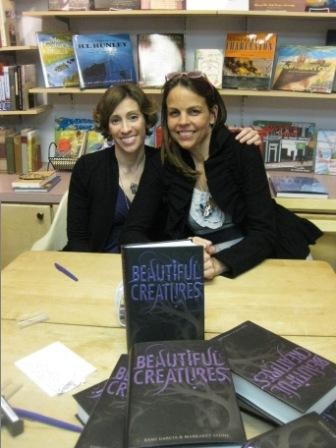 Set outside of Summerville, Beautiful Darkness is the follow-up to Beautiful Creatures, named to several lists of the best books of 2009 (both adult and YA). Beautiful Creatures was published in 37 countries and translated into 28 languages, and a movie treatment is in the works. Filmmaker Richard LaGravenese (The Fisher King, Unstrung Heroes, The Bridges of Madison County) visited Charleston in January during the event at Blue Bicycle Books. Having met with the authors and soaked up the Lowcountry setting of the Caster Chronicles series, he's since written a script, and Erwin Stoff (The Blind Side) is slated to produce.

And now Ethan and Lena are back, with Beautiful Darkness (Little Brown, hb., $18) picking up right where their story left off in book one. Haunted by strange visions only he can see, Ethan is pulled deeper into his town's tangled history and finds himself caught up in a dangerous network of underground passageways, crisscrossing the Lowcountry from the Santee to Savannah.

A former teacher and video game creator, respectively, Kami Garcia and Margie Stohl live in Los Angeles. They dove into writing on a dare from their children. Devotees of Flannery O'Connor and Harper Lee, they love the South and they love Charleston. When they found out their official book tour wasn't stopping here, they made their minds up to come anyway. After all, the lovely weirdness of the Lowcountry permeates their Southern Gothic novels. And, as Margie says: "Even if it's only for the pie it will be worth it."

They'll be in town for three days, visiting five area schools and filming a documentary with Kaleb Nation, videographer and author of the Brian Hambric young adult series.