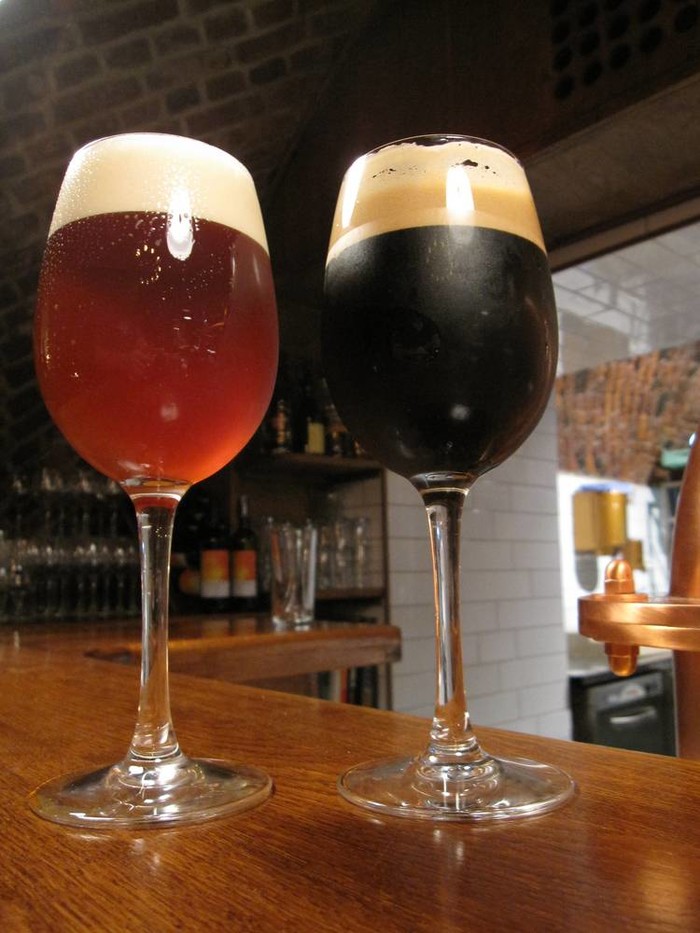 1:48 am on Friday October 21, 2011 | Posted by
Evil Twin Brewing and Stillwater Artisanal Ales to brew at Westbrook

If you're quick on the draw, you're reading this here first.  Two world-renowned gyspy brewers, Brian Strumke from Stillwater Artisanal Ales and Jeppe Jarnit-Bjergsø from Evil Twin Brewing﻿, will be brewing at Mount Pleasant's own Westbrook Brewing next week.

Both of these brewers ascribe to the "gypsy" business model, whereby a brewer travels to different breweries to create his-or-her wares as opposed to owning and maintaining their own brick and mortar.  They are both represented in the U.S. by 12 Percent Imports, founded by Brian Ewing, which exists only to bring the finest in European craft beers to market here.  Brian will be joining these guys on the trip down South, as he did for their recent collaboration with CBX and Oak on the greatest beer dinner in the history of humans.

Stillwater Artisanal Ales is a minor exception to 12 Percent's Euro-portfolio.  American-born brewer Brian Strumke found his calling hand-crafting exceptional Belgian ales, mainly in the saison category, which he views not as a style so much as an approach to the process and product.  His "brewery" is officially out of Baltimore, but most of his lineup is brewed in Belgium and then imported. Evil Twin Brewing is a gypsy operation based out of Denmark by brewer Jeppe Jarnit-Bjergsø.  Though unassuming, the man already had scads of beer cred as owner of Ølbutikken﻿, a Copenhagen beer store ranked top 5 in the world by Ratebeer (along with CBX), and as Head Blueberryman behind Cantillon Blåbær Lambik﻿ (5% ABV, A+, 100).  Evil Twin makes some serious beers with playful names like Cats Piss and Monk Suffers Serious Sugar Rush On Barbados.  His twin brother is Mikkel Borg Bjergsø﻿, the man behind the gypsy brewing giant that is Mikkeller, hence the name. Joining Brian, Brian, and Jeppe will be a brewer from Fanø Bryghus, a Danish brewery (with a building) where most of Evil Twin's beers have been made, along with a couple of Stillwater varieties.  Based on Jeppe's talk at the beer dinner, it's conceivable this fellow is the namesake of Evil Twin's Ryan and the Beaster Bunny. This is, frankly, an extremely big deal.  This is the first Evil Twin beer made in the United States.  This is the first time a European brewer has contract-brewed in the United States, period, as far as I know.  This the first time a Stillwater beer has been made anywhere in the United States other than Maryland.  And it's all happening in Mount Pleasant?  Pinch me.Surrounding all the brewing will be a couple of events that local beersfolk can attend and talk shop with our honored guests. Sunday, October 23rd at 8 p.m. the group will join the Charleston Beer Exchange posse at Coleman Public House for a fun, informal drinking session.  Two Stillwater and two Evil Twin beers will be on tap, rare draft options in these parts:

Coleman Public House is located at 427 W. Coleman Blvd in Mount Pleasant, and all are weclome. Details are scant on this next one, but the same crew will head over to Social Wine Bar on Wednesday, October 26th at 8 p.m. for a night of pairing wine with beer.  You read that right - not beer and food, not wine and food, but wine and beer.  Two Stillwater and two Evil Twin beers will each be paired with a wine, and each pairing will be available for purchase.  Put your moderation cap on, folks.  Like the CPH event, no reservations or entrance fees are required, just show up and pay as you go.  Social Wine Bar is located at 188 East Bay Street downtown. Keep an eye on my @CHSBeer Twitter feed for updates, coverage, and freakouts, and as always our #beer landing page for everything you never wanted to know about local goings-on.
Most importantly, come out to these events and show some beer-geek love to these guys.  They could literally be brewing anywhere, and they are coming to our backyard.  Respect.﻿﻿