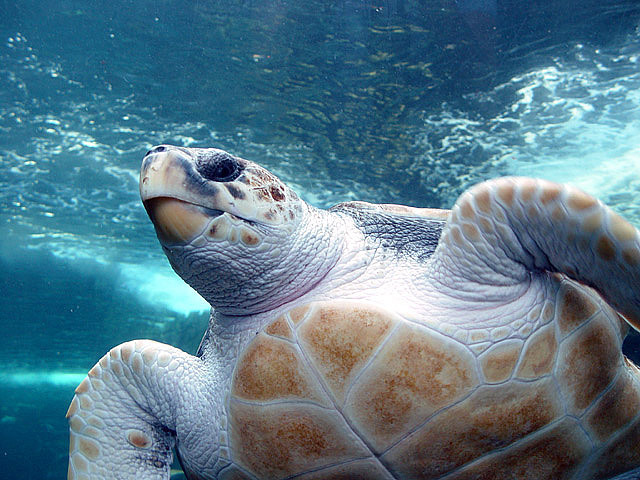 Update June 18: The three sea turtles were released before a respectably sized crowd on the Isle of Palms on Friday.

The Post and Courier﻿ was on hand and has a short report and solid photo gallery from the event.

First report June 17: The weather's toasty, so why not make a trip out to the beach to take in some nature and see an impressive loggerhead, green sea turtle, and Kemp's ridley ﻿be released?

The South Carolina Aquarium's Sea Turtle Rescue program ﻿has nursed the trio back to health and will release them at the Isle of Palms County Park at 4 p.m. on June 17.

The event is open to the public. Those who attend should arrive early, carpool, and expect to pay for parking at the county park ($7 per car).

More on the turtles being released:

Santee: A 160-pound loggerhead found September 14, 2010 by a local fisherman who observed that the turtle was not able to dive or swim away. SCDNR was called and brought the turtle to the Sea Turtle Hospital at the South Carolina Aquarium. X-rays revealed excessive gas build-up in the intestine caused by a large impaction of horseshoe crab shells. The impaction passed on November 1, 2010. Santee's treatment included antibiotic and vitamin injections, mineral oil tube feeding, and regular x-rays. Santee has made a full recovery and has a healthy appetite and is ready to hunt in the open ocean.

Euginia: A nine-pound green sea turtle found stranded on April 20, 2011 on Kiawah Island S.C. Euginia was dehydrated, hypoglycemic, and covered in barnacles and sea squirts. Treatment included fluids and vitamins, antibiotic injections, bloodwork and radiographs. Euginia has fully recovered and looks like a whole new turtle; she is ready to join her turtle friends back at sea.

Edwin S. Taylor: A Kemp's ridley, the most endangered out of all the species of sea turtles, was accidentally hooked by a fisherman on the Folly Beach pier on April 14, 2011. On top of being hooked, Taylor had some lesions on his/her body. Treatment included antibiotic injections, antibiotics on the lesions, lots of food, and TLC. Taylor has been active and swimming around his/her tank since arriving, surely practicing for the release. Taylor is at optimal health and strength and has been medically cleared.