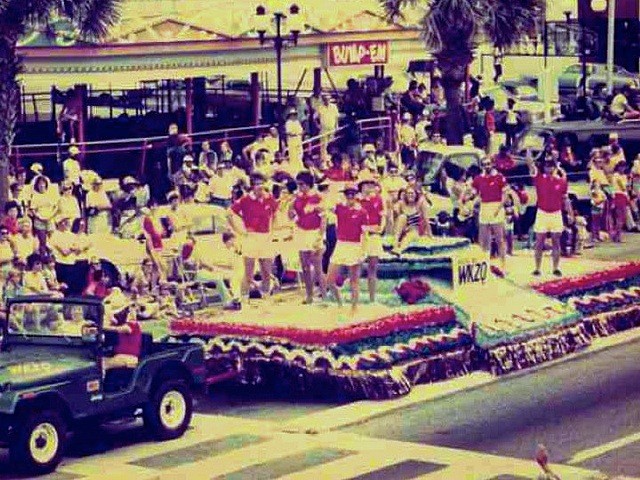 Photo by John Van Pelt
Along with the Pavilion, the Sun Fun Parade used to be a big draw for both locals and visitors. It was also the big kick off of the summer season.

Update September 4, 2012: Despite a shout out for event planners to take the reigns on the 2013 Sun Fun Festival, no one has expressed interest.

Organizers also say that the festival no longer draws in the crowds it used too, making it unable to cover the costs with revenue from attendees.  You can read more in this Sun News article.

Update April 17, 2012: WPDE had a follow-up report with a brief interview with Richard Singleton, MBACC Chairman.

Singleton stated that last year's Sun Fun Festival cost just under $100,000 before sponsorships and the Board would prefer to spend the money on out-of-market tourism promotion. The WPDE write-up is here. Out-of-market promotion is also what the controversial 1% Tourism Development sales tax is used for and generates roughly $20 million per year.

First Report: The Sun Fun Festival used to be a pretty big deal. Tourists could walk right out of their Ocean Boulevard hotels, with kids in tow, and get a great view of the parade. For the hospitality and retail business owners, it meant they could dust off their cash registers and prepare for another frantic Summer season.

But over the years, things changed. The dismantling of the Pavilion by Burroughs and Chapin caused downtown Myrtle Beach, and consequently the Sun Fun Festival, to lose it's anchor. The event organizers attempted to relocate the event to Market Common which never seemed to get traction. I will speculate that this was mostly because the event was no longer near the hotels. As beautiful as The Market Common district is, tourists aren't exactly passing through it in droves. As an unsurprising result, the Myrtle Beach Area Chamber of Commerce (MBACC)  believes the event has become a low-return money loser and they are no longer interested in supporting it.

For those of you not in the news business, one of the best times to drop a potentially disappointing news release is late Friday afternoon or over the weekends. At 4:15 p.m. on Friday, the MBACC released the following statement from Chamber Chairman Richard Singleton (relevant phrases have been highlighted):

“The MBACC board of directors has made the decision to suspend certain events this year that are not self-sustaining. With the interests of both the membership and organization in mind, the board of directors has decided that general events held in-market in 2012 that are not self-sustained by sponsorships, ticket sales or event-specific revenue, should be suspended so our out-of-market advertising investment can be maximized and we can invest in real estate promotion. Additionally, the MBACC board of directors has collectively decided to support the evolution of some other events, including the Sun Fun Festival, that in their current form do not maintain the goals of the board or the best interests of our membership.

In 2010, the MBACC board of directors made it a priority to increase the number of events held in-market over the following two years. We carefully observed what worked, what didn’t and what could be improved upon, and after reviewing the results of both existing and added events, some events are continuing, some events are evolving and others are being suspended. Specifically regarding the Sun Fun Festival, the 2012 festival has been suspended but plans to privatize and improve the event to potentially bring it back for 2013 are currently in the works.

While the MBACC staff ensured the success of all events in previous years, accomplishing the goals set by the board of directors, we cannot justify the cost to host or produce these events without complete self-sustainability. Should there be a time in the future when these events could demonstrate self-sustainability, we would be more than happy to revisit our decision.''

While the MBACC is no longer interested in organizing or hosting the festival, it sounds like they are open to partnering or working with anyone else that might be. Which makes me wonder: how much big money and organization did those early Sun Fun Parades really require? It seems like a bunch of locals originally got together to have a party in the streets to signal the start of summer. Could this be an opportunity for someone to bring Sun Fun backs to it's roots as a fun, downtown event?

While we're certain the our newsprint colleagues are cooking up some much more in-depth reports (we'll certainly update this story as those come out), a couple of local TV stations quickly took to speaking with locals about the announcement: