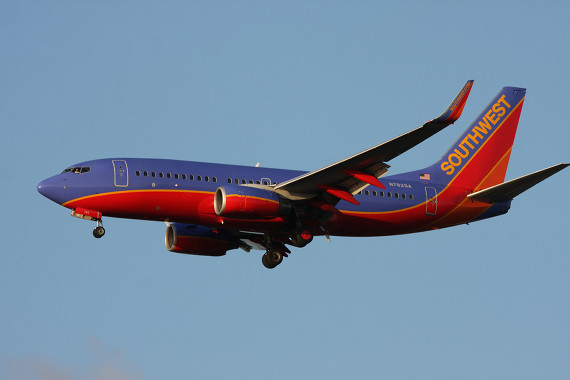 4:16 am on Wednesday May 5, 2010 | Posted by Amanda Click
Incentive program has discount carrier ready to serve Lowcountry (updated x2)

Image by Flickr user San Diego Shooter Southwest Airlines might be flying the friendly skies around Charleston in the near future.

Charleston County Council is moving ahead with the proposal for a new 5 percent tax on rental cars that would generate revenue to use as incentive money to lure a low cost airline into town.

According to The Post and Courier, "The next step in the process is a public hearing May 20th, leading to a final council vote on the tax, which would apply to all passenger vehicle rentals of 90 days or less in Charleston County."

The tax increase still isn't sitting pretty with all parties involved, but a majority of council members feel that bringing Southwest Airlines to the Charleston International Airport is well worth the headache a 5 percent tax will produce for rental car companies.

If you're interested in attending the public hearing on the matter, it is taking place at 6:30 p.m., May 20th in the Public Services Building, 4045 Bridge View Drive, North Charleston.

Rental car companies are ready to fight back against the proposed 5 percent tax increase on their services to fund the airline incentives.

According to The Post and Courier, car rental taxes already exceed 20 percent at the Charleston International Airport and 12 percent elsewhere. However, the 5 percent increase would raise about $1.5 million in one year, bring a discount airline to the area, and most importantly bring loads of new customers through the airport's doors.

Locals who use rental car services would feel the tax increase on their wallet, but we're all going to have to give a little to get something in return.

Good news from the Charleston International Airport: a major discount airline is ready to bring their service, and all indicators point toward Southwest Airlines.

As of yet, there has been no confirmation that it is in fact Southwest, and before the discount airline will make its move the county needs to raise money for incentives by imposing a new 5 percent fee on car rentals.

As a frequent traveler and native of the North, this is great news to me. However, airline expert Mike Boyd had this to say to The Post and Courier:

He cautioned that while discount carriers might lower prices, they also could drive out existing services. And a surge in rental car prices could turn off potential visitors, he said.

"The name of the game is access to the rest of the world, particularly for Charleston, particularly for Greenville-Spartanburg, which have international trade," Boyd said. "If you get a flight to Orlando but lose Chicago connecting to Beijing, that is a net loss."

Pop over to The Post and Courier's article for all the details.

Another gripe with the incentive plan to bring a discount airline is that it is only beneficial to the Lowcountry and Upstate. Read more about the beef a Midlands senator has with that right here.