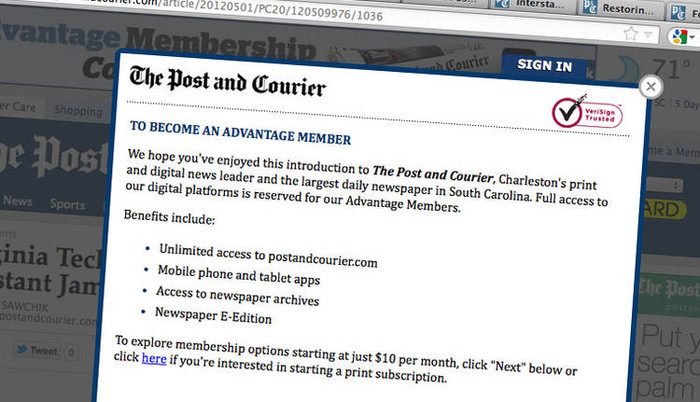 As was expected, The Post and Courier﻿ today flipped the switch for a "pay wall" on its website, asking visitors to pay $10 per month after viewing five articles.

The newspaper's publisher, Bill Hawkins, wrote in an editorial that, "Most of our local news will no longer be free on postandcourier.com for non-members. After five story views a month, visitors will be offered the opportunity to subscribe to The Post and Courier with all of the advantage benefits, or opt for a digital only subscription at $10 a month or $99 a year. Our mobile and tablet sites will be metered as well.﻿"

Allowing a limited number of free page views is a common tactic by newspaper websites with pay walls. The aim is to allow a website to still keep reader high amounts of casual reader traffic to the website from Facebook, Twitter, or other online referrals, but while still trying to bring in additional revenue from frequent local readers.

The move is likely a result of increasing pressure on newspapers as a whole to make up for a a growing revenue gap. Although online advertising continues to grow a double-digit percentage increases, at many papers the number of dollars lost on the print advertising side continues to outpace the gain on the digital advertising side.

The Project for Excellence in Journalism﻿ recently wrote in a paper that, "Print ad sales, which still account for 92% of the overall ad revenue of the papers that provided data, fell by an average of 9%. Thus the actual dollar gains were outnumbered by losses by a factor of 7-to-1 for those papers."

At The Post and Courier﻿ the paper is not using a technology that will allow readers to skip the pay wall when being referred by sites like Google News.

The paper is using the Press+ third-party service that tracks user visits by "cookies", and, after five article views, ﻿prompting readers with a JavaScript dialog box to log in with a $10 per month plan or create an account.

(As a side note: I've not been able to trigger the pay wall while browsing with Safari, Chrome, or Opera, however, Firefox tripped the pay wall.)

The paper still offers a $9.99 per month E-edition plan that offers a PDF-like copy of the daily paper, and print subscribers will get free access to the website (delivery starts at $18 per month).

Additionally, the paper is restricting online comment posting to subscribers only. As Hawkins puts it, the "privilege of commenting on stories online﻿."

Earlier this year The Island Packet in Beaufort County just south of us used the same pay wall provider, Press+,  except that it allowed for 10 articles and tried not to limit local readers. That pay wall experiment appears to now be over — during which the paper receive push back from locals who were erroneously delivered the pay wall requirement and traffic was lackluster.

Over here at TheDigitel we'll certainly not be the only ones watching the traffic statistics for the paper's website.

Closing note: At TheDigitel we do recognize that some users will hit the paper's pay wall, and as we often refer users to a lone source where there is clearly superior reporting. So when we recommend a reader visit The Post and Courier﻿'s content, we'll be sure to connect you with a secondary free-access source.