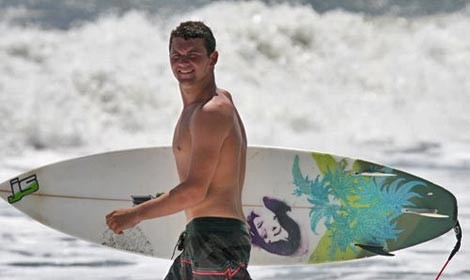 Few details have been released in the stabbing death of Folly Beach surfer Craig Massey. But The Post and Courier brings us up to speed on what is known about the July incident.

The paper retells accounts of the night and talks about the background of Massey, 19, and his alleged stabber, Charles Richard Dobson, 19, in part:
Massey's friends said he had an on-again, off-again relationship with Mary Whilden Hills, 19, of Johns Island. She also had a romantic relationship of some sort with the suspect, 19-year-old Charles Richard Dobson Jr., according to his attorney.

Dobson is accused of stabbing three people with a large knife.

The case also hinges around the controversial Castle Doctrine, which basically may relieve Dobson of fault if he fought back in his own home withe what he though was necessary self defense.

ABC News 4 has a story the day after the incident in which Dobson spoke in self defense about the need for force.

If you go read The Post and Courier's story, dive down into the comments where you can see a rash of back and forth between those who think Massey was at fault, and those who think Dobson was.

A tragic night for sure, but we should know more come September 2, when there's a preliminary hearing.