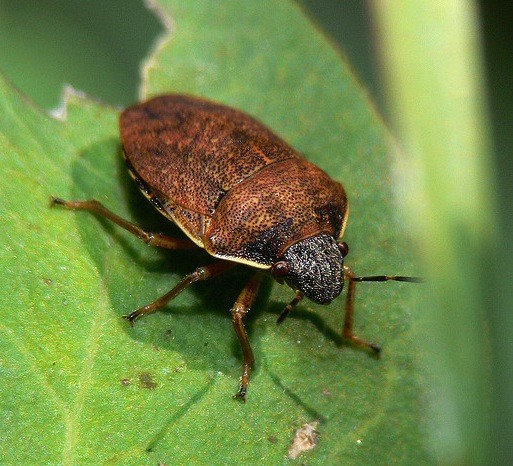 Update March, 25th, 2012: Stink bugs have invaded Myrtle Beach and causing some residents to turn up their noses.

via The Sun News:

...the new species moving into South Carolina and other parts of the deep south are an even bigger problem, especially for farmers. Kudzu bugs were first found in Horry County last summer...

Read The Sun News' write-up here and check out our first report below the video.

Update September 11: Nearly a year on, bug's march continues and as of September 2011 the bug has been confirmed in every South Carolina county.

And while the news is somewhat welcome as the bug is helping tame the towering masses of kudzu in South Carolina, concerns are growing that bug's appetite may soon include cash crops like peanuts and soy beans.

First reporting October 3, 2010: Bo Petersen at The Post and Courier writes that stink bug-like bean plataspids (aka kudzu bugs) are on the march from Georgia, invading many upstate South Carolina counties already.

And they also have a real fondness for swarming walls inside your home.

Take a read of the paper's report over here, and here's some tips on identifying them and a number of good photos of the bugs and their eggs.

You can learn loads more about the bug and its spread in this video by UGA College of Agricultural and Environmental Sciences entomologists (published in September 2010.)

Note: Some times we like to share content from our sister sites in Charleston and Beaufort, this story originally was posted back in October of 2010, but TheDigitel Myrtle Beach didn't yet exist. However, we feel that this story is relevant to us here in Horry County and all of our farmers in the area.