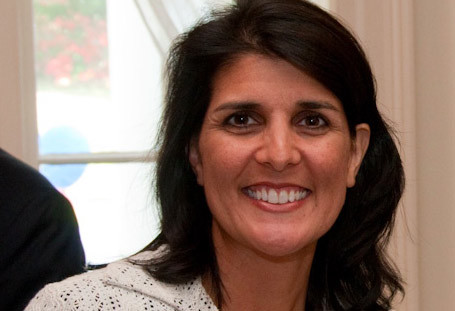 Update June 3: There is now a second person claiming to have had sexual relations with GOP gubernatorial candidate Nikki Haley.

Just hours before the GOP Candidates Forum was scheduled to take place in West Ashley, Lobbyist Larry Marchant, a consultant to Lieutenant Governor Andre Bauer claimed that he had sex with state Rep. Nikki Haley back in 2008. Haley is once again denying the accusation, calling it "disgusting politics."

Head over to Live News 5 for the story as well as videos of both Marchant's confession Haley and Bauers' response to the allegations of a second affair.

Update May 25: And Folks has fired back saying there's e-mail and cell phone records to prove it. Details here.

In addition, Folks told The Post and Courier that Nikki Haley and her campaign asked him for advice on how they should handle the news of their inappropriate relationship when he broke it.

Yet more updates at the bottom.

Just days after S.C gubernatorial candidate Nikki Haley was seen taking the lead in the race for the Republican nomination, state political blogger Will Folks of FITS News is claiming to have had an "inappropriate physical relationship."

Folks says this happened "several" years ago -- putting the timeline of events prior to Folks' marriage but during Haley's marriage of 14 years.

As for why he's announcing it just now Folks says that:

Specifically, within the last forty-eight hours several pieces of information which purportedly document a prior physical relationship between myself and Rep. Haley have begun to be leaked slowly, piece by piece, to members of the mainstream media.  I am told that at least one story based upon this information will be published this week.  Watching all of this unfold, I have become convinced that the gradual release of this information is deliberately designed to advance this story in the press while simultaneously forcing either evasive answers or denials on my part or on Nikki’s part.

This was just announced at 8 a.m. today, May 24, so we'll have to wait for a response from Haley's campaign as we start to see how much sticks.

In the meantime, go check out Fits' lengthy announcement over here.

Update 11 a.m.: Haley has denied the accusation saying is a statement that "I have been 100 percent faithful to my husband throughout our 13 years of marriage."

CNN's Political Ticker has more on the response.

WIth the primary on June 8th, things should get interesting -- and we can find out which of the two camps is telling less than whole truths.

Update 1 p.m.: The Post and Courier has been writing an ever-expanding post about this and has put together some nice background on the Sanford sex scandal and Folks' politically charged background; take a read here.

Meanwhile Public Policy Polling is doing some interesting thinking and ponders if S.C. Republicans will be as forgiving as they were towards GOP men that cheat, or treat Haley more like a Democrat that cheats (read: less well.) Here's a link to that post.

And the Columbia Free Times has some additional background on the rumors that have been swirling around for some time about the alleged affair.