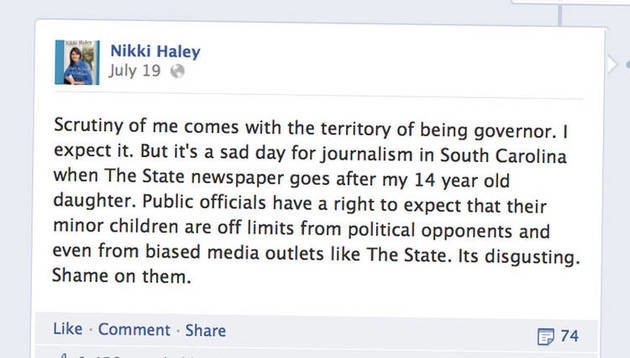 4:52 am on Monday September 24, 2012 | Posted by Ken Hawkins
Haley fumes after questions about daughter's job (Update: only 14yr old on SC payroll)

Update at the bottom...

On July 26th, Political columnist Brad Warthen has done some solid reaction and pondering on this story, in part:

Update September, 24, 2012.  Gina Smith from The State newspaper has a piece on how odd Haley's daughter's government-funded job was.

Additionally FITS news has some information regarding more state funded jobs that have gone to Haley's family and associates. Read that here.

Finding family and friends jobs isn't anything new, however it is odd coming from a tea party favorate candidate who is opposed to Government spending.