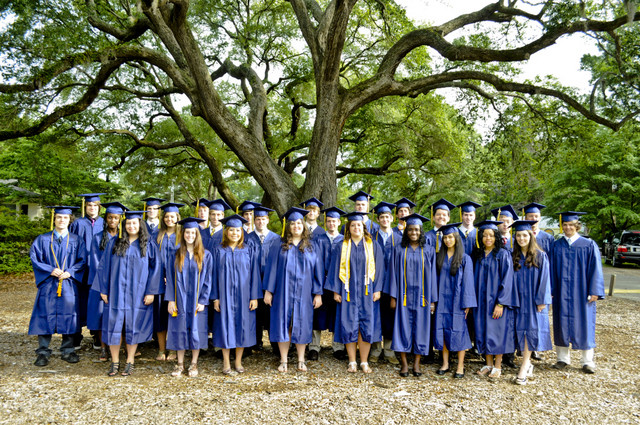 1:42 pm on Wednesday May 23, 2012 | Posted by
Charleston Collegiate School graduates urged to 'Listen to Your Inner Voice'

Charleston Collegiate School held its Commencement on Saturday, May 19, and 28 seniors, several of whom had attended the school since kindergarten or first grade, were awarded diplomas.

Members of the Class of 2012 will be attending University of South Carolina/Capstone Program, Clemson University, College of Charleston, Winthrop University, The Citadel, Rutgers University, Academy of Art University (San Francisco), and Spring Hill College, among other schools.

Honor Graduate Vanessa Salcedo-Avila of John’s Island spoke at the ceremony, encouraging her classmates “not to let the noise of others’ opinions drown out your own inner voice.” She addressed the crowd in both English and Spanish. Ms. Salcedo-Avila benefitted from the John E. Thompson Jr. Scholars Program during her four years at CCS. In her address, she thanked her sponsors who are residents of Seabrook Island: “I cannot express enough gratitude ... Without my sponsors, my life would be a lot different.” Ms. Salcedo-Avila not only earned the highest award which Charleston Collegiate bestows, but she was also the class Valedictorian.

Charleston Collegiate School is a progressive, nonsectarian, independent day school on John’s Island which serves students in preschool-grade 12 from all over the greater Charleston area.