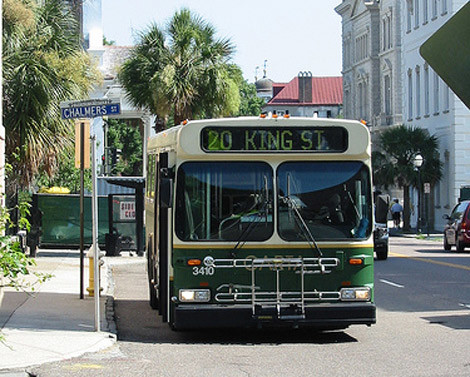 Berkeley County's rural bus system, TriCounty Link, will soon be linking four towns with downtown Charleston, hooking up with the city's CARTA system in North Charleston. By the end of August, the two new weekday express routes is expecting to be up and running for Summerville, Goose Creek, Moncks Corner, and Ridgeville. A round-trip ticket should cost less than $5.

From The Post and Courier:
One route will head from the new Berkeley County Office Building on U.S. Highway 52 in Moncks Corner to the county's satellite office on U.S. 52 in Goose Creek before connecting with a CARTA bus at the Kmart Super Center at Rivers Avenue and Otranto Road in North Charleston. The CARTA bus will continue to downtown Charleston.

The other route will start at Ridgeville Town Hall and go to the old shopping center parking lot at the juncture of U.S. Highway 78 and Berlin Myers Parkway in Summerville before dropping off commuters at the Kmart in North Charleston for the CARTA trip downtown.

The express routes are being paid for through two federal grants totaling $450,000, (TriCounty Link director Will) Hutto said.

Also, you can ride the bus system free tomorrow (June 19) during their observation of Dump-The-Pump Day.