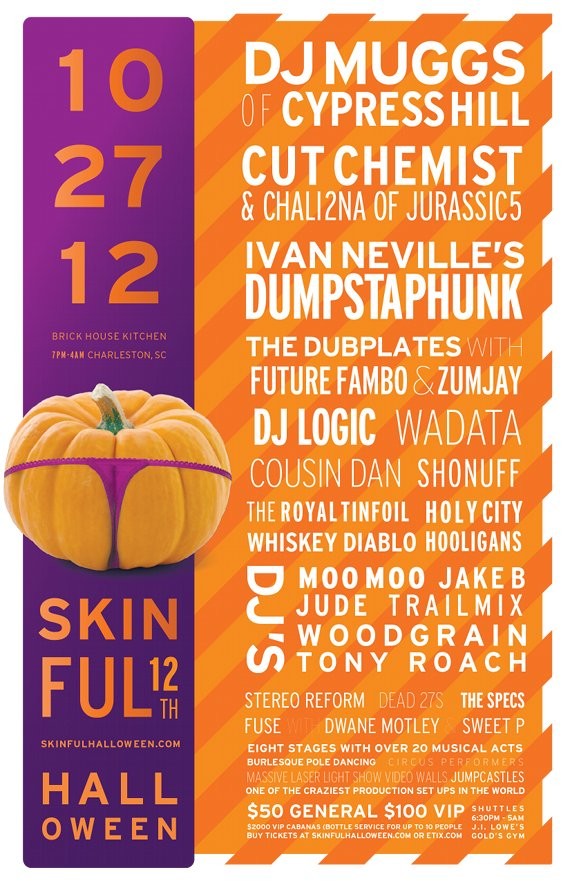 Update October 29: With another successful Skinful in the books, photos from the event are beginning to surface.

We found a nice set to whet your whistle on Tag Your Photos'" Facebook page.

Update October 23: There are only five days left until Skinful Halloween - are you ready?

If the music lineup wasn't already awesome enough (there's eight stages set up out at Brick House to accommodate them all), a little birdie told me that Wu-Tang's GZA will also be making a special appearance during the event.

So folks, get your party pants on, it is bound to be a big night!

Update October 3: Early bird ticket pricing has ended and ticket prices have been bumped up to $50 for general admission and $100 for VIP.

First reporting: Details are still trickling on to the official Skinful Halloween website, but here's what we know so far:

First and foremost, it's all going down on October 27 from 8 p.m. until 4 a.m. at the Brick House Kitchen on James Island.

As was the case last year, there will be no on-site parking and no personal coolers allowed. There will be cash bars everywhere, however, so bring some loot.

Tickets are on sale now at the early bird prices of $40 a pop for general admission and $80 for VIP.

To get a glimpse of what you're in for, check out Jewell&Ginnie's video from Skinful 2011.

Skinful 2011 from Jewell&Ginnie on Vimeo.

The post on the Halloween events proved to be an interesting one. I really enjoyed the Halloween video that is shared with the post and have bookmarked the page for future reference. Keep on sharing more and more posts like this how to stop snoring