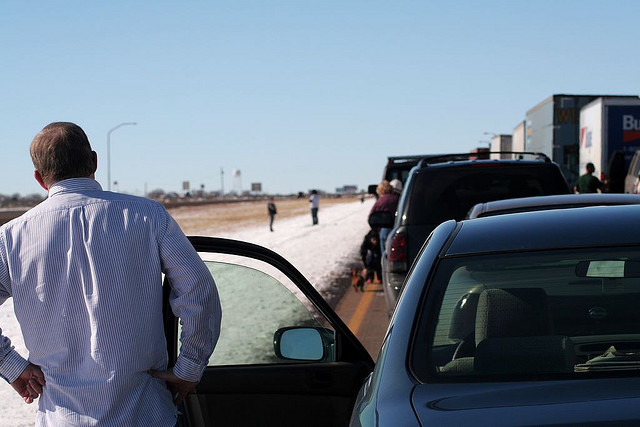 Image by Flickr user penguinchris Not the scene in question, but you get the idea.

I spotted an article in today's Post and Courier about a woman who was livid over U.S. 17 in rural Red Top being closed for 20 minutes to allow a parade procession to cross the highway.

An obvious comparison not made in the paper's brief is the annual Cooper River Bridge Run that shuts down U.S. 17 for well over an hour, in fact several.

Update September 19: State Transportation Secretary Buck Limehouse is putting his foot down to block the parade router in the future. Read about the latest turn at The Post and Courier.

Seems heavy-handed to me, and that there must be other ways of addressing the issue. That part of U.S. 17 is  much busier than it used to be, but it's still not that busy that something else couldn't be worked out.

Update September 26: A compromise has been reached where the parade will go on but the procession may be temporarily paused to allow traffic to flow if traffic becomes too backed up. -- It's such an obvious answer one has to wonder why this wasn't the first reaction? Read about the latest at The Post and Courier.

Update November 1: The Post and Courier is reporting that Transportation Secretary Buck Limehouse has issued his rules for the compromise and the community seem to be OK with them; read about it over here.

Odd that the state has no uniform code for operarting parades like these, Red Top is not the only parade that interupts a road where alternate routes are few.