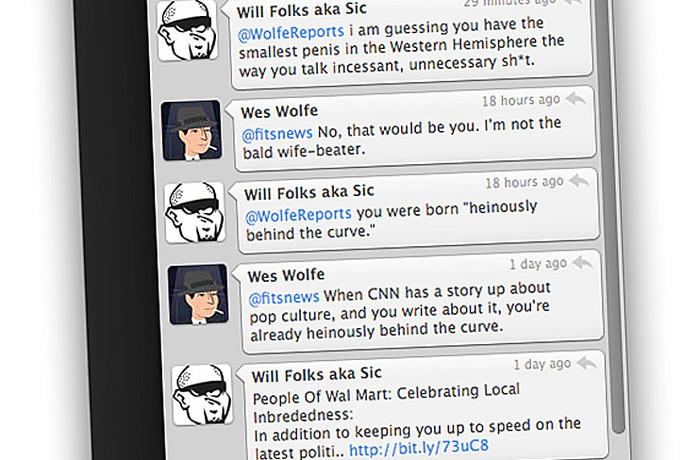 Earlier today I remarked about how one must read political blogs with a good sense of skepticism. Then this afternoon I stumbled on a poignant reminder of why.

To be sure, political blogs often pick up on the story first, but they're also fueled by passion, rivalries, and a burning desire for Web traffic.*

Here's the reminder I saw, a Twitter exchange between two South Carolina political bloggers: @WolfeReports and @FITSNews [cursing cleanup is mine]:

@fitsnews: People Of Wal Mart: Celebrating Local Inbrededness: In addition to keeping you up to speed on the latest politi.. http://bit.ly/73uC8

@WolfeReports: When CNN has a story up about pop culture, and you write about it, you're already heinously behind the curve.

@fitsnews: you were born "heinously behind the curve."

@WolfeReports: No, that would be you. I'm not the bald wife-beater.

@fitsnews: i am guessing you have the smallest penis in the Western Hemisphere the way you talk incessant, unnecessary sh*t.

@WolfeReports: I just like pissing your wimp-a** off, big boy.

@fitsnews: and I enjoy reading your website once every two months or so.

@WolfeReports: And I don't give a sh*t.

*Yes, the fact the mainstream media is headed down that path is not lost on me.