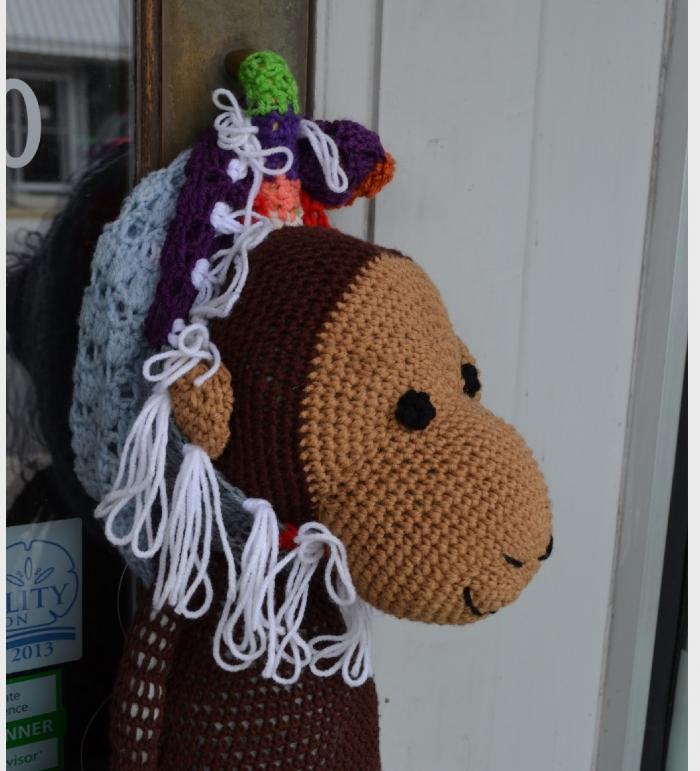 A crocheted monkey sculpture that was originally attached to the awning of Rivertown Bistro was maliciously removed overnight and it was found Sunday morning tied by its neck to the front door of the restaurant. The crocheted animal was originally installed on Saturday morning by an artist volunteer as part of CREATE! Conway's Yarn Zoo project.

A police report was filed on Sunday afternoon and it appears that a vandal ripped the crocheted monkey from the awning sometime early Sunday morning, after the restaurant had closed. Vandal(s) then removed a knitted cozy from a nearby planter and used it to tie the knitted monkey's neck to the handle of the front door of the restaurant.

Barbara Streeter, director of CREATE! Conway, the sponsor of the City-approved, Yarn Zoo project stated, “While this may seem like an innocent prank, it is actually malicious damage of private property”.

She went on to state, “Yarn Zoo is seen by some folks as silly and unnecessary and some people fail to understand our purpose and intent.  The point of the project is to bring visitors to downtown Conway and offer something for the kids to enjoy. Creativity and expression through the arts contribute to the vitality of our community.”

“Conway is a community with a diverse range of needs and ambitions, it is to be expected that sometimes, with public art that a divergence of expectations and desires will lead to controversy, but vandalism is not a core value that makes our community more livable; it is a problem and a nuisance and ultimately, it is something that police are well-equipped to deal with.”, Mrs. Streeter said late Sunday.

CREATE! Conway remains committed to using public art as a tool for economic development in downtown Conway and also, as a way for people to discuss their differences publicly, in an atmosphere of tolerance and respect.

The Yarn Zoo project is a new public art installation of hand-knitted and crocheted animals and other creations that are currently on display in the streets historic downtown Conway, SC. The artwork was created by a team of ten volunteers who worked for over two months to create whimsical animals, flowers and brightly-colored, crocheted coverings that have been installed on railings, benches, bicycle stands and trash receptacles throughout the downtown.

The project is intended to engage area residents, visitors and especially children, in fun and creative activities. For example, next Saturday, May 4th, CREATE! Conway will host a Kinder Garden where children will be able plant handcrafted, crocheted flowers to create temporary flower garden in a City-owned alley between 3rd Ave and Scarborough Alley.  Volunteers from the organization will be available from 11:00 a.m. to 5:00 p.m as a part of Conway's annual Rivertown Art & Music Festival.

CREATE! Conway's mission is to maximize the cultural and business potential of Conway, South Carolina through exhibition, performance, demonstration and promotion of all forms of art. CREATE! Conway promotes, facilitates and advances the arts, culture and heritage resources in and around the city through an active engagement in a variety of public art initiatives.