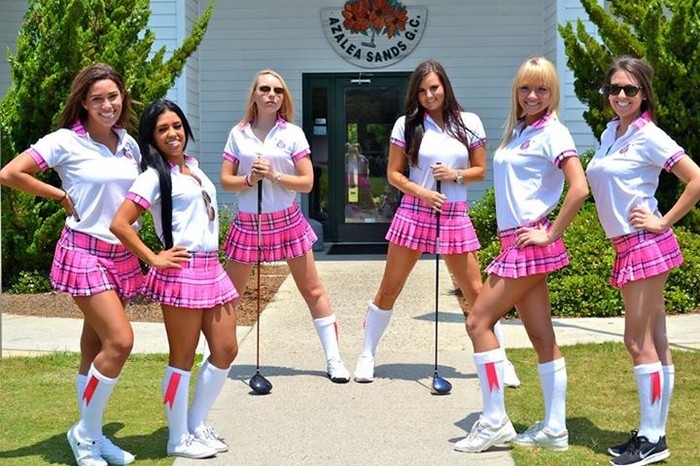 Girls from The Kilted Caddy Club: Look a company that in no way promotes a Debaucherous stereotype of the Myrtle Beach area...and a company that other local media fawned all over to get a story...

9:15 am on Thursday June 26, 2014 | Posted by Rocky | References WBTW.com
Tourism officials Freak Out Over Joke in Golf Digest

In the recent July issue of Golf Digest, the magazine ran a satirical piece that was basically an itemized bank statement entitled "Making a Statement Three Days in Myrtle Beach". The 'statement' shares a Golf weekend in Myrtle Beach that most officials don't want to admit goes on more often than not.

In the 'statement' there are items ranging from "XYZ Discount Liquors" to "Hush Hush Cabaret" and even a trip to a bail bondsmen. Let's be honest, we have a ton of liquor stores, strip clubs, and bail bondsmen. Let's be more honest, Golfers, especially groups of just men down for a trip, get into some trouble -legal and otherwise. I spent my fair share of time working in restaurants in my past and the number one thing golfers want to know? "Where's the best strip clubs?" "Is such and such club any good?"...and this is why there is stacks and stacks of free admission passes to every jiggle joint in town behind every bar along the Grand Strand -even the most family friendly chain restaurants.

There are four things a majority of groups of male golfers are seeking when they come here: Golf, Booze, Food, and women. Do all of them have this mission in mind? No. But enough do to make this a proper stereotype that is ripe for satire.

Is Myrtle Beach much more than that? Sure. But lets not forget, Las Vegas is a family friendly destination now too.

My take is: lighten up, laugh it off, and move on. And maybe work to change the image and perception of the area instead of denying it's pretty much the average.

Head over to WBTW.com for their write-up and broadcast of this controversial issue.

And, look at it this way, at least we're not Florida...